Parrish is Fast Becoming a Favorite of Mine in This Genre! 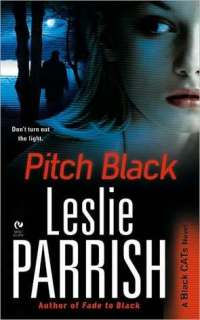 Leslie Parrish does it again! She's given us the second installment of what I've heard is a Black CATs trilogy (though they're so good, I can't help but hope they continue), and in keeping with the first, Fade to Black, she's knocked the romantic suspense genre on its butt with the well-paced, finely-crafted, and emotionally taut Pitch Black.

Alec Lambert is an FBI profiler who's a bit on the outs with the Bureau after a bust went bad and left an agent dead and put Lambert in the hospital with gunshot wounds. He's still on some emotionally shaky ground, doubting his own abilities as he starts his latest assignment working for Wyatt Blackstone's Cyber Action Team (CAT). Unfortunately for a pair of teen boys, best of friends to the very very end and victims of an old nemesis of Alec's, Lambert has to hit the ground running on his very first day with the team in a race against time and cyberspace to catch their killer, the notorious Professor. That ground leads Alec straight to Samantha Dalton, divorcee and near recluse, and definitely a woman with a mission against all things cyber crime. She was the last one to have any contact with one of the victims, and her world is about to blow apart when she realizes she may not just hold the key, she may actually be the key to the Professor's capture. If she lives through it.

As I was with Fade to Black, I was extremely impressed with the mature development of the relationship between the romantic leads, Alec and Sam. It's such a delight to see a relationship that has both sparks flying and realistic progression given the surrounding story line. To me, this aspect really sets Parrish's books head and shoulders above many many others I've read. And there's so much depth given to each character, deftly and subtly woven into the plot instead of seeming at odds with it. Such a treat to read.

A caution, though, as Parrish has another unique skill that doesn't lead to the warm fuzzies. Her skill at bringing the reader right into victims' experiences gives us a disturbing insight that sets her apart from others I've read in the genre. It's also, I feel, what brings true darkness and horror into her books. They're not particularly gory - in fact, Fade to Black in particular could have been and wasn't - but they do touch a deep chord and leave no room for doubting a human monster's capacity for depraved cruelty. Not by languishing in the mind of the killer, but by humanizing the victims and familiarizing us with them even as they die.

It's dark stuff at times, and may not be for all readers. I have a pretty much love/hate relationship with it, myself, actually - love it on an intellectual level, but it resonates a sorrow deep enough in me that I can still feel it days later.

All in all, I highly recommend Leslie Parrish's Fade to Black and Pitch Black. I did like Fade to Black just a wee bit more, as Sheriff Stacey Rhodes and Agent Dean Taggert are two of my all-time favorite characters in this genre, and there was one part of Pitch Black where Sam's actions struck me as almost stereotypical-victimish, doing something she should have known better than to do, though I do understand her reasons for doing them. Still, that doesn't detract too much from my enthusiastic enjoyment of this book and the ongoing trilogy.

4.5 Stars and a definite must read!