Not a Favorite In the Series 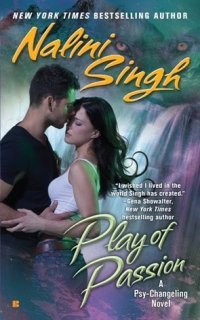 Tensions between the Psy and the changeling have never been higher as Silence continues to fracture and the insidious Pure Psy movement grows. The SnowDancer pack and their allies DarkRiver are bracing for increased hostilities and surprise attacks. It's definitely not a good time for hormones to be raging out of control, especially if you're a dominant female wolf and one of the pack alpha's most trusted lieutenants.

Indigo Riviere doesn't have time to play around with pack flirt and charmer, Drew Kincaid. He's declared his interest in her but he pushed too far and is too obviously looking to work off some stress in the naked and sweaty way. Problem is, he's younger than her, also dominant, and his position in the pack is...complicated. It's confusing her wolf. Hell, it's confusing her, too. She doesn't want to lose his friendship, there's no doubt he stirs her blood, but Indigo may just be too dominant to ever accept him.

Andrew Kincaid has bled for his pack and he's killed for them. His job demands it. He deals with the dark weight of responsibility by smiling, flirting, and having a good time. It's a coping mechanism, and it has its own purposes, but it doesn't for one minute mean he's the harmless young rogue Indy thinks he is. Drew is a dominant wolf who knows exactly who his mate is and he will use every bit of charm at his considerable disposal to convince the stubborn woman, no matter how long it takes. Indigo is his, and not even she can say otherwise.

Let me just get this out of the way before I go any further: Singh is one of my favorite authors, both her Psy/Changeling and Guild Hunter series are two of my favorite series, and I love how she writes. I need to say that first because this book didn't really work for me, and within the parameters of the series, it was a little disappointing. I'm not saying I think it's a bad book. In any other series by any other author, I probably would've liked it just fine, but in this series the bar has been long-since set extremely high, and this one didn't reach it for me.

First, the characters. I was a little surprised at how flat and two dimensional both Indigo and Drew seemed to me. That's nothing near normal in this series. Hell, even the characters I haven't liked since the series started have gotten more fleshed out than these two. Their relationship evolution, as well as the requisite conflicts between them, also seemed limited and lacking depth.

She's a dominant; so is he. She's older than he is, and his pack position isn't quite clear in the hierarchy of SnowDancer. That's the whole of the relationship conflict that gets hashed out throughout the romance arc of the book. Oh, and he's charming and she's stubborn.

There's something wrong when I can sum up both Singh's main characters and their relationship conflict in a couple of sentences. And this is something I never thought I'd say, but I was a little bored by the will they/won't they mating dance. It was just too limited to really seem like a question with consequences.

On the other hand, the "they will" moments were chock full of lusty good times and smoking hot sex scenes!

There were plot threads that could have added some depth or insight into the characters, but they were dropped or lacked development. Drew speaks with Indigo's mother and she mentions he needs to meet Indigo's sister and someone else that she keeps nameless for a time. I got the impression that meeting these two were supposed to give Drew insight into Indigo's personality. He never met the sister, and I think the nameless one was supposed to be Indigo's aunt Aida, but when he did meet her, nothing was mentioned that hearkened back to that conversation between Drew and Tarah, so I wasn't sure.

Another problem for me with this book was the limited page time the characters were given for their relationship to evolve. Between the shifting focus in the narrative from plotlines that encapsulated the pack's issues and the Psy Council antics, neither of which were particularly cohesive, nor furthered the series storyline arc in any significant manner, the whole book felt jumpy and jerky and a little disorganized to me. It also seemed largely inconsequential to the series big picture.

It did, though, serve as a very nice prologue to set up what I can only guess is going to be a cataclysm of storytelling in the next book. Hawke's book. Sienna's book. The one I've been waiting for since the series started. The tension between those two has been ratcheting up, over, and off the charts for several books now and I can't wait to see how it all plays out. But not at the expense of this one, and that's exactly how I felt about this book at the end. That it was little more than cannon fodder for the next.

But I stand by my opening comment. Singh's a favorite. So is this series. While Play of Passion may not have lit my fires, there's just been too many fantastic reads so far to get upset about it. Every series has its transition books, books that seem more to change the series direction than further the established series arc, and maybe that's exactly what this book was intended to do. It would've been a great book in any other series or world. Just wasn't quite enough to make me happy in this one.

Return from Play of Passion to Paranormal Romance Genre

Return from Play of Passion to OGBDA Book Reviews Home