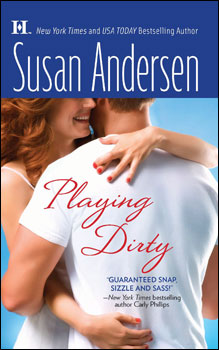 Disclosure:   An ARC of this book was provided to me by HQN Books, an imprint of Harlequin, via NetGalley.

Thirteen years ago Ava Spencer was a senior in high school, overweight, and despite her two best friends, not one of the popular girls in school. Dating the wildly popular and sinfully gorgeous Cade Gallari was like a dream. She gave him her heart and her virginity. Then at lunch the day after that momentous event, in front of a jeering crowd, Ava watched in growing horror as Cade's best friend stood up, peeled off two hundred dollars from his wallet, and loudly proclaimed that Cade had won the bet to bed the fat chick.

Ava, devastated and sick, rallied enough to lob a zinger back at Cade and his friend in that tragically public milieu, then crumbled in private. That sick joke, along some nasty mommy issues, had a crippling affect on Ava that thirteen years and several rebuffed attempts by Cade to apologize couldn't heal.

Though she'd shed pounds and kept them off for twelve years, her body would always be lush and curvy instead of svelte and lean. That's how she's built. Most days, she's comfortable with her body and can see herself as the sexy woman she is. Most days, she's confident in her job and her stellar people skills, and runs her own business with flair and determination. Most days she loves her life and herself. Standing in the mansion that she and her two best friends inherited, waiting on documentary film director Cade Gallari so they can finalize arrangements for him to rent the mansion for his next film, however, isn't most days.

There's no excuse for what he did to her all those years ago, and Cade is most sincere in his apologies. Every one of them he's tried to give her through the years. There were mitigating circumstances, but none that would matter to the gorgeous Ava. He knew that. He was starting to suspect he'd never get beyond his past and that possibility was even more painful now. Cade had been hot for Ava since he figured out he liked girls around when puberty hit, but looking at her now, fully appreciative of her stunningly gorgeous and deliciously womanly body, that pain is like a hot knife in his gut.

He can finagle his way into the mansion, he can even convince her to work for the production as the concierge, that's business and he's very good at his business. As filming commences, though, and they start rubbing elbows, he realizes a few more painful truths. He respects her. He likes the woman she's become. Hell yes, he wants her in his bed again. And Ava is never going to forgive him for the worst mistake of his life.

This enemies-to-lovers themed romance was a sexy delight, driven by two strong characters with charm and charisma. Andersen entertained and impressed with a sassy, quick witted dialogue, slick narrative, sexy hero, and feisty heroine. Cade and Ava were truly fantastic...um...once we got past the Cade's-a-scum-sucking-maggot portion of the story, anyway, and I especially appreciated the realism of Ava's body image issues. They weren't so overdone that they turned Ava self-pitying, but the flashes of insecurity were completely understandable and sympathetic given her past with Cade and a lifetime with her mother. I thought they were deftly handled as a factor in her burgeoning relationship with Cade, and balanced nicely with her natural saucy demeanor and wicked wit.

That mother-daughter relationship was another believable element of the story - scarily so, actually. On a much brighter note, Ava's friendships with Poppy and Jane were warm and wonderful. I haven't read the first two books in this trilogy...yet...but as soon as I finished this one, I snatched up the first two and set them on my terrifyingly tilted tower of TBRs. I don't normally like reading books out of order like that, but this one was enough of a stand alone novel, and Poppy and Jane were such lovely little spitfires as secondary characters in this one, that I have to go back and find out more about them and how they got their HEAs.

I have to admit, I didn't care for the small thread of suspense that wended through this book with the grifter's character. He was nothing more than a distraction to me, and I wish there had been a different plot thread concerning the diamonds. I didn't think the book's light tone fit well with the darker thoughts and contingencies he was dreaming up. Then the climax of the conflict with him at the end tread a little too close to slapstick absurdity for my tastes, and set up a way-too-cheesy-for-me resolution scene between Ava and Cade that seemed a little trite and altogether too easy.

Still, I had a heck of a good time with this book. I was yearning for some brain candy and a guaranteed sexy, sassy read when I started this book, and Playing Dirty delivered all the goods. Andersen is solidly dependable for that, for sure. The chemistry between the Cade and Ava worked perfectly throughout the book, sparking the fires of all sorts of heated emotions, and the friendships between Ava, Jane, and Poppy added depth to their character definition and story. Mostly, it was just a raucous good time and I enjoyed almost every minute of it. I can't wait to get started on the first two.

Return from Playing Dirty to One Good Book Home