Pooka in My Pantry 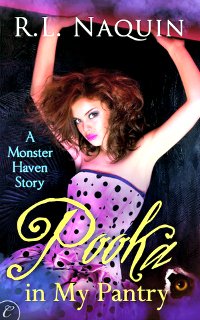 You'd think finding out you're an empath and monsters are real, then dispatching a deadly incubus and saving the lives of countless women would have granted wedding planner extraordinaire Zoey Donovan at least a small reprieve from the crazy, but no. No such luck for the intrepid helper of the Hidden. Between delivering sea monster babies and doling out love advice to closet monsters, keeping half her life a secret from her best friend, and pining for her missing sorta-boyfriend, EMT/not-so-grim reaper Riley, Zoey's life has not just taken a turn for the surreal, it's parked there and grown roots.

Apparently Zoey has the extreme misfortune of still being alive, despite being slated to die on two separate occasions. Death gets mighty cranky when that happens. Throws the whole cosmic balance out of alignment. Now she's got to deal with Riley's supervisor and a craptastic bit of bad mojo tripping her up at every turn. If she survives the next two weeks she'll get taken off death's To Do list, but it will out her as an Aegis to the Hidden head honchos.

If that happens she'll be snatched from her life and everything she knows and be consigned to work for the Hidden council for the rest of her life, so it's sort of a whole damned if she does, dead if she doesn't sort of situation. Which...when you consider just how Zoey's life has been going lately...isn't really all that surprising when you think of it.

Just another day in the life of Zoey Donovan and her creepy coterie.

Friends don't let friends get felt up by the supernatural.

It was love at first paragraph. Seriously, all it took was the first paragraph of the first book to know I would adore this series, and the kicks and giggles just keep on rolling in this second installment. I love the characters, I totally dig the author's voice, and the stories keep me entertained for hours of pure reading bliss.

Zoey is so much fun as the heroine. She's wacky, weird, and wonderfully socially challenged. With a heart as big as Texas and a penchant for trouble, she's easy to root for when her life spins out of control. Which it does. Constantly. Love it!

Even more than my appreciation for Zoey is my absolute worship of her inner circle of monsters and other non-human creatures. Maurice! Molly! Iris! It doesn't matter how much page time they get, they steal every scene. Especially Maurice. I was even more bummed than Zoey when Maurice went to visit his estranged wife for so much of the narrative. And don't even get me started on Andrew's fennec fox, Milo.

No, really, do not get me started. I'm still struggling with forgiving Naquin for that. Bad author! No cookie for you!

We get to see some new faces in this one, of course. As the title suggests, we meet a wonderfully pervy little pooka who, while not as universally appealing as Maurice, did add a good amount of chaotic amusement. And then there were the gremlins. I loved the gremlins. Bump and Glob and Bink were in what? Two scenes? They stole the book, I swear. So cute! So fun!

With this wonderful cast of characters, I have to admit, the story doesn't really need to be that spectacular to keep me entertained, which is probably a good thing, because in both books, the external plot conflicts were my least favorite parts of the books. And this one was just a bit less engaging than the last. I love the chaos of Zoey's life, but for about three quarters of this book the storyline centered around her surviving all the bad luck thrown her way.

It was fun, sometimes hilarious, it was even occasionally heartbreaking, but it wasn't exactly layered or complex. Towards the end of the book the plot starts to add some interesting elements, and there are some twists and turns I wasn't expecting as the book rolls towards conclusion, but it ended up seeming almost like an afterthought, or some heavy-handed foreshadowing of a more meaty conflict for the next book. It didn't quite fit as seamlessly into this one as I would have liked.

I have one more slightly dissatisfied confession, too. Despite my rabid fandom of romance, Riley didn't work for me as Zoey's erstwhile romantic interest in this book. We met him in the first book and I liked him just fine there, but in this one he just seemed more of a character appendage than the story contributor he was in book one. Most of the time here he pops up looking wild-eyed or acting worried for Zoey, is good for a lip lock or two, then slips beneath the surface again until the next time he is brought into a scene. Don't get me wrong, I'm all for romance man candy, but he just didn't offer me much beyond that in this story. I hope there is more done with his character in the next book.

It certainly goes without saying that I'll be slavering to get my hands on that next book. I can't wait to see how the developments in this one translate to upcoming events in the next. I can't wait for more of Zoey's wacky day-to-day life, either. That's some of the absolute best of both books!

Speaking of both books, I think new readers could probably start the series here and catch up to what's gone on with little trouble. Naquin explains previous events well enough, and she has an ease with reminding readers what went on before that I appreciated. I wouldn't recommend you do that, though. Start with the first book. Don't miss out on any of what went before. You'll thank me for it. Trust me.

"Did you ever hear the song, 'Don't Fear the Reaper?'"

"Did you ever think that song wouldn't have been written if people didn't already fear them? Nobody's written a song called 'Don't Fear the Kittens,' have they? Of course not. Nobody's afraid of kittens. That would be stupid. Everybody in their right mind is afraid of reapers."

We talked and laughed, and for a while, I thought we were safe from anything else going wrong. Never say that. Never think it. That's usually when the screaming starts. 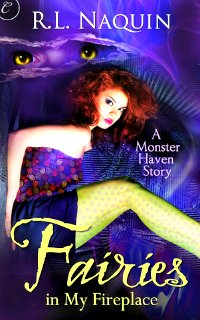 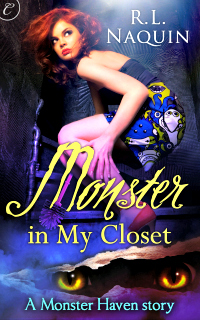 Return from Pooka in My Pantry to Urban Fantasy

Return from Pooka in My Pantry to One Good Book Home