Portrait of a Kiss

Portrait of a Kiss Has It All 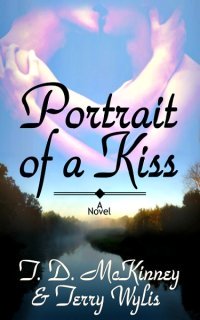 Retired police detective David Schaeffer has inherited a fine, large southern house in a small town following his aunt's death, but that's not all he's inherited. The house comes with a fifty year old murder-suicide scandal and tales of the ghost of the killer, one Brian Terhune, a young gay man ostracized by the small, ultra-conservative town that fifty years ago had even less tolerance that the rest of the world for openly gay men. The only problem is that the moment Brian sees the portrait of Brian Terhune in his room, the heart in David drops at Brian's feet and the cop in David doubts immediately that Brian killed anyone. When Brian himself agrees in all his ghostly glory, David falls hard for the young and handsome...er...dead man and his doubt becomes an unshakable quest to free Brian from his eternal limbo, even when it looks like someone is more interested in making David join Brian on HIS side of the veil.

This story unfolds with rich southern charm, thick and heavy with romance and mystery, love and loss and humor, and tragedy tempered by hope. The characters are very fully drawn and as the town around David and Brian starts to shed its prejudice and warms up to David, and as the truth starts coming out little by little, Brian too, what's revealed is a an old southern lady full up with unique secondary characters that are quintessentially "small town" - with all the quirks and harmless oddities and charms.

I thoroughly enjoyed Portrait of a Kiss. I laughed, I cried...and my heart ached for David and Brian and for the tragically murdered young couple that Brian was accused of killing. My only small complaints are that I wish it had been longer (okay, that one's selfish), and that the beginning had been fleshed out a bit more...that there had been a bit more build up before the revelation of Brian in a tangible way. Also, the physical relationship between Brian and David was very artistically and tastefully written - almost to a fault, actually, as I have a personal preference for more sizzle when the story warrants it - and it did here. Even all together those are such minor issues when faced with the fabulous and fun and loving Portrait of a Kiss that it doesn't detract much at all from the overall. 4.5 Stars and a highly recommended read.

Return from Portrait of a Kiss to LGBT-M/M

Return from Portrait of a Kiss to One Good Book Home