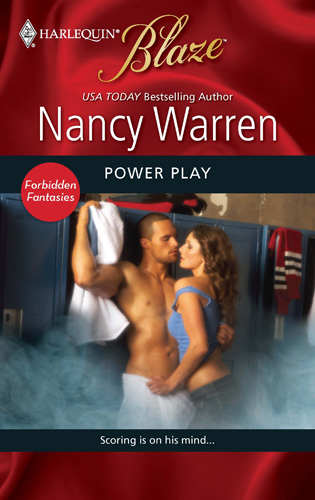 Emily Saunders is in Elk Cross, Idaho, for her cousin's wedding. Staying in a hotel to avoid family issues and overcrowding seemed like a good idea at the time, but late night shrieks of horror and a bedbug infestation are almost enough to change her mind. Soon her clothes are confiscated, she's evicted from her room as the hotel wing is quarantined, stuffed into a room that the hotel doesn't even offer due to a leaky roof, and forced to share that room with a strange man. AND she's got to wear the most hideous pumpkin colored bridesmaid dress on the planet. This is not Emily's week.

Soon though, she realizes her roommate isn't so bad. In fact, he's great looking, single, and a cop who plays hockey for an over thirty grandfather league. Things heat up between Emily and Jonah, but between Emily and her family, things couldn't get much worse. She just can't seem to stand up for herself and the pre-wedding responsibilities are piling up higher and higher. Just when Emily's at her most stressed it starts to rain, and suddenly things aren't looking quite so glum, even with the thunderous tattoo of rain in the buckets of the room Emily and Jonah share.

I liked Power Play and the heated romance of Jonah and Emily. I can't say it was a spectacular read, but it was a pleasant few hours of entertainment. I wish Warren had kept the plot a little simpler, actually, and given the reader more time for the development of the relationship between Jonah and Emily, because their scenes were the highlight of the book, and several made me chuckle. I could've done without the odd twist towards suspense with the third cousin conflict. That felt weirdly out of place given where it was introduced in the story. And as much as I liked the Kirsten/Sadhu thread, I couldn't quite figure out why it was in there. No matter how pleasant, it was still an unnecessary distraction.

While the story wasn't terribly original, the characters not particularly well developed, and the plot not likely to break any contemporary romance grounds, it was a sweet and sometimes sexy way to spend a couple of hours, and it provided a nice, light read. In truth, I wasn't expecting any more than that, so I was in no way disappointed.