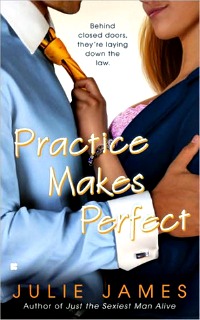 For eight long years Payton Kendall and J.D. Jameson have been professional adversaries and fellow associates at a prestigious Chicago law firm. Payton thinks J.D. is a supercilious jerk, J.D. thinks Payton is an ultrafeminist liberal shrew. They dislike each other with equal fervor and have spent the past eight years sniping, snarking, and jawing at each other...in private, of course, as to do so publicly would hardly be professional. Consistently trying to one-up each other (seriously, what other reason would Payton set her alarm for the ungodly hour of 5:30 a.m. if it wasn't to beat J.D. into the office?) they've taken professional competition to an art form and were quite settled in that routine as they worked their obscene schedules, both on the cusp of being made partner.

When the firm that they have both poured their blood, sweat, and tears into, however, announced that only one of them would make partner and the other would be shown the door, the two long-time rivals are forced to take a second look at their spitfire relationship. With their firm as the new object of their horror and angst, suddenly the differences between them aren't nearly as annoying as they have always been...and that's about when the sparks not only start to fly between them, but pretty much erupt into a massive conflagration.

Julie James has created a highly entertaining romantic comedy that is rich and full bodied, with a lightning quick dialogue of quips, cracks, and competition, and a smooth narrative that rockets along at a breakneck pace. Without doubt, this is one of the most entertaining light contemporary romances that I've read all year. Admittedly, I have a special fondness for enemies-turned-lovers romantic comedies, so I was predisposed to enjoying this little gem, but above and beyond that, Practice Makes Perfect is the real deal.

The dialogue is genuinely funny, the situations that Payton and J.D. get themselves in are a riot, and the backbone of the story included some depth for the characters and provided a surprising amount of explanation for the driving forces behind these career-driven rivals. Both Payton and J.D. are tops in their games, both intelligent, and both charmingly flawed...but not grievously so. They make excellent protagonists, and never so much as when they're fighting with each other and...well...when they're not.

I wasn't totally convinced in the main conflict of the firm's decision to only take one partner, and not being in the legal profession, I don't know how realistic it is that one would have to leave the firm after eight years of dedicated and exceptional work (that sucks a lot, by the way). The conflict seemed a bit odd given that the story had already established that there were only Payton and J.D. left in the class eligible for partnership and that each year previously, the entire class had made partner. Even with the judgment that the firm decided to preemptively address, taking only one when in the past it had always been more than that seemed a little like manufactured conflict for the purpose of creating angst instead of organic development of the characters' lives.

And okay, there were two instances where the competition between Payton and J.D. tiptoed over that line between hijinks and flagrant, adolescent immaturity, but...I, um...still thought they were pretty darn funny. And I can't say enough for just how perfect the chemistry was between them. It sizzled and it smoldered, and even had moments of sweet tenderness. I was also pleased by the moments of insecurity that each character showed and how dealing with those insecurities added another level of cohesiveness to their relationship.

This was my first experience with a Julie James book and not only will it not be my last, but as soon as I finished this one, I quickly purchased her earlier work, Just the Sexiest Man Alive. I was thoroughly satisfied and completely entertained by Practice Makes Perfect. It was the perfect light, funny read and just what I needed for some pure enjoyment. Great stuff.