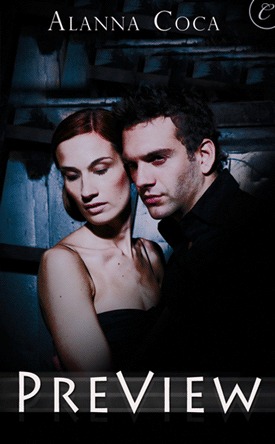 Ryann Phillips doesn't dream. Not like other people do, anyway. For as long as she can remember, her nights have been a doorway to her psychic visions. Some of the things she sees are mundane, some are heartbreaking. Most she can do absolutely nothing about. She's an architect, after all, not a god. Still, she has used her abilities for good and she does help when she can.

Unfortunately, she doesn't know how to find, let alone help, the woman she'd seen in her most recent vision, a woman named Victoria who will be murdered in a spray of blood in the slick elevator of an unknown office building.

Knowing her vision will come to pass puts a weight of helpless dread on her heart...or it does until a shocked Ryann catches a glimpse of Victoria leaving a coffee shop near Ryann's office. Trailing the woman to her posh law office and trying to explain the danger to her wasn't the most embarrassing experience of Ryann's life, but it was close. It went both better and worse than she'd feared. Better, because Victoria seemed to take her seriously and believe her. Worse because she calls into her office a fellow lawyer in the firm she works for, a man named Trevor Kearney, and holds Ryann's vision up as proof that the husband Victoria is in the middle of quite acrimoniously divorcing is, in fact, trying to kill her.

Trevor, openly skeptical though hotly attracted to sexy architect and self-proclaimed psychic Ryann, isn't so quick to jump on the woo-woo bandwagon. Humoring the woman to get a chance to get closer to her, though, was well within his skill set. And he had mad skills. Skills that are shot to hell when he's forced to acknowledge that Ryann's...ability may be on the level and the threat to his client may not only be real...it may also bring a murderer far too close to the one woman he can't help but need to protect - with his life if necessary.

Just between you, me, and the lampshade, I'm an over-thinker. I try to keep that juicy bit of gossip on the down-low to avoid those pesky I-told-you-so's from friends and family, though, so don't spread it around. It's true, though. I over-think and over-analyze all the time. In fact, I'm one of those people who can enjoy a book, or elements of a book, as I'm reading it, but when I'm finished I tend to sit back and think about what I read, often dissecting it to poor little pieces. Sometimes that reflection even changes my initial opinion of a book if some of the plot elements collapse when viewed through the lens of hindsight, or if, when looked at as a whole, the book doesn't maintain its cohesion. That's exactly the problem I had with this book, despite Coca's original storyline, unique concept, and ability to weave an entertaining tale.

I was completely on board with the suspense elements, enjoying them immensely, until the end. The Bad Guy's actions were suitably shocking and disturbing in all the right places, and there was quite a nice plot twist towards the end I hadn't seen coming. When I thought back to the whole of the story, though, I wasn't able to fully understand the Bad Guy's motivation or sufficiently reconcile the behaviors taken considering the identity of the Bad Guy and the facts provided as the climax of the book was unveiled. As a result, the entire suspense thread suffered a severe blow in plausibility and believability, albeit in retrospect.

Unfortunately, it wasn't just the suspense elements that gave me problems, and not all my issues were gathered up in hindsight. As much as I liked Ryann's character and enjoyed the romance plotine later in the book, I had some serious initial issues with Trevor as the male romantic lead, not the least of which was that he was a complete troglodyte.

I'm all for alpha males. Love them, in fact. There's a line, though, between alpha male and domineering asshole, and unfortunately - both for Trevor and for my reading enjoyment - he crossed it. I don't care how frustrated a man gets with a woman, forcing her into a sexual situation that she is uncomfortable with is my definition of sexual assault. Breaking into a woman's home when she refuses - as it is her right to do - to take your calls or listen to an explanation that could be summed up in two words in a phone call (leave a message, jackass), is my definition of criminal trespassing and treads dangerously close to stalking. Saying things like, "I can't wait to show you off," or deciding for the little woman what she will or won't like, is just...well...icky. And so last century.

None of that worked for me, and it's a testament to Coca's skill as an author that I was at least able to enjoy the romantic resolution and feel good about the conclusion of the romantic plot thread despite those rather egregious stumbles.

It wasn't enough to really satisfy me, or warm me to the whole of the book, but that enjoyment goes hand in hand with a suspense thread that, while going through it, did have appeal. I wish the Bad Guy had clearer motivations and more intelligent, comprehensible behavior, because the writing style of the book definitely had its high points. As I said, most of my issues with the suspense only came to mind in hindsight, so I was fully invested in those threads while reading. There is simply a pleasing blend of style and substance that pops up in the book in enough places to pique my interest in more of Coca's work, even if this one wasn't a total hit with me.

Return to top of PreView