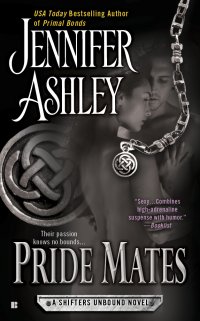 Jennifer Ashley has created a complex alternate universe in which shifters - a race of creatures created by the Fae - stepped out of the shadows twenty years ago and revealed themselves to humans. In some countries shifters were feared to such an extent they were hunted down, but in others - like America - they were rounded up and given a choice of execution or a life on human terms, a life which grimly harkens back to how Native Americans were treated: forced to live in reservation-type shifter towns with limited access to education, jobs, money, and amenities that any human with a cell phone, an HDTV, and a laptop take for granted. To further control them they were forced to accept the Collar, imbued by Fae magic and technology, which suppresses their more animalistic instincts and viciously punishes them for any aggression. In those twenty years, there have been no shifter attacks on humans in America; no reason to believe that shifters were any true danger to the human race...until the murder of a human girl and the arrest of her shifter male boyfriend make national headlines.

Defense attorney Kim Fraser is a notorious spitfire in the courtroom. A defender of the innocent. A believer in justice. When she's given the case, she's convinced of her shifter client's innocence and determined to free him. Both horrified and disgusted by the injustice and mishandling of his case, she will stop at nothing to absolve him from guilt, even by entering Shiftertown to interview her client's friends and family and try to secure his alibi. That decision, that trip, sets Kim on a path destined to strip away her preconceptions and reveal the truth about shifters - their customs, their habits, and what secrets they protect and care about the most. With shifter Liam Morissey as her sexy guide and protector, Kim falls further and further into a web of shifter politics and machinations, determined to uncover the secrets and lies, wary of the dangers. And those shifters, one in particular, start becoming more and more important to Kim with every step closer and closer to the wild side.

I really enjoyed this paranormal romance. It is certainly an interesting take on what human reaction would be and what could happen in the aftermath of the "coming out" of the different races of shifters. It is perhaps a sad commentary that I found it to be so realistic. On a brighter note, I loved Kim and Liam (with his delightful blarney) and thought they were very well matched and likable. Liam's family was great, the secondary characters layered and well developed, and I especially enjoyed learning about the structure of the shifter races as the mythos was begun here. There was a satisfying originality to both the AU world and the plot that isn't often found in this sub-genre of romance. The only tiny critical thought I had about the plot is that I felt the development of Kim and Liam's relationship and the world building were so enthralling that the connection between Kim's client and everything else that happened was a little too thin to give the final conflict as much impact as it could've had. That being said, it was a well thought out and realistic conflict that I could buy as a legitimate threat, so I appreciate that as a reader.

There just isn't much else to be critical about in Pride Mates. I really enjoyed it. The only thing that kept this book from being a five star read for me isn't a criticism of the book at all, it's strictly a personal preference. I felt that the prejudice and rampant discrimination, the segregation and willful oppression, and the forced Collaring of the various shifter species was a bit too realistic and immutable for my personal tastes. It's hard to feel totally happy for a couple when the male's whole race is being so grievously subjugated, regardless of the benefits to that race or the strides they've made. I prefer books with issues and conflicts that can be triumphed over as the lead romantic couple comes together and falls in lust/love...but given the condition of the world in Pride Mates, the most depressing aspects of that world aren't something that can be overcome in a book - and maybe not even in a series. Just worked around or adapted to. That's a little sadder a thought than I like to have in my pleasure reading. Still...Pride Mates gets four stars from me, as it both pleased me and saddened me in all the best ways and with a classy, unique style.