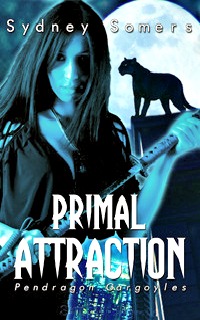 Eighty years ago, Cale watched his mate die at the end of a wraith's blade. For eighty years he's mourned that loss, until one night a goddess' huntress comes for his head, branding him a traitor to Avalon and shooting poisoned tipped arrows at him to put him down. Cale doesn't defend himself. He can't even run from the threat. All he can do is stare as life as he thought he knew it alters in front of his eyes. The fierce huntress, the goddess Rhiannon's immortal servant, is Sorcha. His mate. And from the wicked way she's kicking his butt, it's obvious she has no memory of him at all.

He's got to get through to her. Has to get her memory back. The cat in him is roaring for his mate. Now all he has to do is convince a dedicated warrior on a goddess' mission to not make him all slicey and dicey, hold onto the dagger she's come to collect so he can save his brother, and live happily ever after. Piece of...really difficult cake.

This second entry in the Pendragon Gargoyles series is a bit more robust than its predecessor, Primal Hunger (click here for that review), while maintaining the level of skilled narrative and originality of mythos. My largest complaint with Primal Hunger, in fact, was that it wasn't long enough and it focused too much on the sexual relationship of the romance and not enough on the surrounding plot. I'm pleased to say that wasn't the case here. Somers gives the reader a much more balanced story that fleshes out the world a bit more and gives us a greater understanding of the series arc while offering up Sorcha and Cale's romance alongside it.

I thought Sorcha and Cale were fun characters to spend time with, and I'm really starting to enjoy Sydney Somers' writing style and her ability to create strong characters with flaws, peccadilloes, and insecurities in a realistic way that appeals when mixed with some quick witted dialogue and zippy repartee. And she does angsty drama pretty well, too.

Again, though, I found myself wishing for a longer story. There were several instances where scenes jumped in time and left out scenes that didn't directly include Sorcha and Cale - like Cale's pursuit of the sorceress to help with the spell to free his brother and Sorcha's search for him when he'd disappeared without warning that, had they been included, would have added depth and dimension to the plot and increased the substance of the tale. I also thought the exposition and explanation in this book didn't quite go as far as it could have describing the world, nor was it as detailed as I would've preferred. I would have liked a more comprehensive exploration of Rhiannon and her huntresses, too. I'll freely admit I'm greedy, but I recognize Somers' ability to create an original backstory with imaginative mythology surrounding fantastic creatures and I want to see that realized in a full, rich, vibrant novel that widens the scope of the series and further increases my enjoyment of it. Still have no complaints about the very erotic and emotional physical relationship between Sorcha and Cale. Somers doesn't disappoint in any way in that area.

I'm still hoping for more with the next in the series, Primal Seduction, due out in paperback in December of this year, but like I said for the previous book, I very much enjoyed what this book is...I just wish it was a bit more.