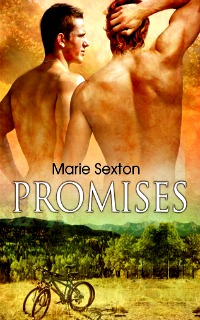 Jared Thomas is an openly gay man living in his small hometown of Coda, Colorado. There's only one other gay man in town, but he's years older and a former teacher, so Jared doesn't have much of a social life. He doesn't actually have much of a professional life, either. Despite being highly educated and having his teaching degree, Jared helps his brother and sister-in-law at the family store. He's certain any attempt to teach in Coda would end badly because of his sexuality, and he's unwilling to leave the town and the mountains he loves. Doesn't make him any less lonely, however, so when Matt Richards walks into the store while Jared is manning the counter and asks about the Jeep for sale sitting outside, Jared is instantly attracted and quick to jump up and offer a test drive - of the Jeep. Not himself. Though...

Matt's the new police officer in town and Jared finds out that they have a lot in common...and if it wasn't for the fact that Matt's a Chiefs fan and Jared's a die hard of their division rivals, the Broncos, Matt would be utterly perfect. Despite the obvious error in football judgment, however, Jared and Matt bond fast and hard over sports, activities, movies, food...everything. For the first time in his life, Jared has a best friend and if it weren't for the fact that Matt steadfastly asserts he's straight, he could very well have a soul mate.

Jared realizes he's in love with Matt. Matt is determined to be straight. Their friendship is one of legend for the fun months of summer, but the longer they hang out together, the closer and closer Matt gets to him and the more and more Jared starts to wonder if hope isn't lost after all. Conflicted emotions and torturous expectations threaten to kill any hope of a romance and break the friendship apart totally when one night Matt acts on urges that he doesn't understand and definitely doesn't want.

Promises is such a great story, made wonderful by the characters of Jared and Matt. Told in first person POV from Jared's perspective, we get a lot of insight into him as a character, and I loved how Sexton balanced Matt's fiercely determined heterosexuality with Jared's less obvious but just as crippling fears. Both men have issues that they can only overcome with each other and I loved that about Promises. I also loved the friendship these men had and the way that this book starts with them really being soul mates without anything sexual between them at all. They erase each others' loneliness and it was a fantastic thing to see.

There were a few things that prevented me from loving the overall book. I think Sexton has quite a lot of technical skill, the narrative is fluid and characters well developed, and other than a couple of editing misses (i.e. Cherie's name being used when Lizzy was being referred to), the story has a very polished, contemporary feel to it. My issues are mostly of the personal preference variety, actually, not criticisms of the story as is.

Despite the months of friendship before anything romantic developed between Jared and Matt, Sexton tossed a lot of issues at the couple in a relatively short span of the book as Matt crashes out of the closet and Jared's life starts to be forcibly widened beyond family. Most of those issues are quite obvious and expected, but not all of them were strictly necessary. I wish that one or two had been pared down to allow for meatier, more significant development of the other very valid issues in a more realistic and less glossed over fashion. I'm not a fan of angsty drama, so I'm not saying I would have preferred that, but I have to admit, this book read a little too lightly for my personal tastes. Every problem was addressed head on, dealt with, and was moved on from without a backwards glance and that's just not the most realistic or, for my personal tastes, satisfying fiction fodder.

I kept getting this mental image of Sexton standing at the edge of a still body of water, a flat stone in her hand. The water is the dark and sometimes desperate issues that any new relationship faces, with an oily top layer of added muck that are the difficulties that two openly gay men can face in society in general and in a small town in particular. The rock in her hand is Jared and Matt's relationship. I kept seeing her sling that rock across the lake and it skipped across the surface, even dipped deeper once or twice before continuing along the top...all the way to the other side, not once really sinking deep enough long enough to truly expound on serious issues in a serious manner.

Again, I'm not complaining or criticizing. I liked Promises quite a bit and loved Matt and Jared. I just wish it had focused on one or two issues that could have been developed with more depth. I didn't like the plot thread revolving around the murder and didn't think it added to the story. I get that Matt is a cop, so maybe that was to tie into that fact, but I didn't feel it necessary to have that element in the book. It smacked of needless melodrama that was covered by Jared's bike accident. I didn't fully understand what Matt's issues were with anal sex, even after he 'explained' it. Jared didn't understand it either, so I didn't feel too stupid, but I wish that issue had been clarified, because I was really scratching my head over it and the fact that it wasn't really understood left it feeling unresolved.

Still, Promises is a good, solid, and sweetly romantic read that I enjoyed very much. I've noticed that Sexton has written several other books with some character overlap, so I'm looking forward to expanding into the loosely connected series. I would definitely recommend this book, especially to neophytes to the M/M romance genre, because the sex scenes were realistic and organic to the development of the relationship and neither overly graphic nor overtly described. It's would be a solid starting point to the wonders and delights of M/M fiction.

Return from Promises to LGBT-M/M

Return from Promises to One Good Book Home