More than Boundaries Get Deliciously Pushed 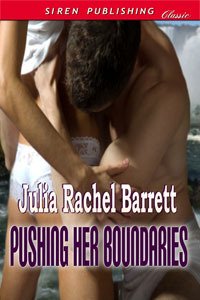 It was a less-than-auspicious beginning. Maggie Anderson sat at the crowded terminal in the airport, trying not to listen to the never-ending conversation of a good looking but charmless guy talking incessantly on the phone. The way the man, obviously a doctor, discussed his patients with someone who Maggie could only surmise was the doctor taking over his cases was contemptible. As a nurse, Maggie was more than familiar with the ego of doctors, but this guy took the cake. It would be a relief to finally board the plane.

Thoughts of relief and plans for the visit with her newly engaged sister quickly flew from her mind when Maggie ends up squashed into the middle seat between the odious doctor and an older gentleman. And chatting with Dr. Mace Williams doesn't exactly improve his cachet, despite his obvious appreciation of her physical attributes. The jerk. The totally hot, completely edible, scrumptious-looking jerk.

A totally hot, completely edible, scrumptious-looking jerk who turns out to be the brother of the man who just asked Maggie's sister to marry him, thereby guaranteeing this trip she was taking to visit with her sister would be as long and painful as possible. With a string of bad relationships in her past, Maggie has given up on men, and Mace is the (yummy) poster child for relationship suicide. Except...the more time she spends with the man, the longer they're in each other's company, his arrogance becomes less of an issue and his appeal more pointed and obvious. She wouldn't dare consider rethinking his worth in a relationship, but what could a fling hurt? Famous last words. A night of passion can be life altering.

When a set of suspicious circumstances collide with plain bad luck and Maggie finds herself paired up with Mace in a struggle to survive, she finally has to face facts. First impressions aren't always true impressions, and Mace, for all his arrogance and ego, may be just what the doctor ordered to do more than just heat up the sheets. He may just turn out to be the one her heart needs to be whole.

Sizzling hot sex, likable characters, and solid, descriptive writing highlight this tasty little morsel from Barrett. Maggie and Mace charmed me - earlier than Mace charmed Maggie, certainly, and I was particularly enamored with Mace. I sort of loved how he reacted to Maggie beyond the physical, fell for her so quickly, and how he let his hurt show in the scene following her emotional withdrawal - it was coarse and cold, but believable. I have a fondness for romances that display emotional vulnerability in the male characters and a fascination with watching them deal with it, and that satisfied me in this book.

I favored the second half of the book more than the first, and I was in love with this story from the moment Mace and Maggie made it to the cabin before the canoe trip through to the end. Barrett wrote a visually and emotionally satisfying narrative, and I was completely invested in Mace and Maggie's struggles to stay alive against the worst nature had to throw at them. They truly started to shine for me as people, as balanced and realistic characters, as opposed to little more than lust-saturated hormone bombs. Er...not that there's anything at all wrong with lust-saturated hormone bombs, but the other works better in a story that extends beyond the bedroom.

I was confused by the presence of Maggie's sister and Mace's brother in the story. They were the motivation for Mace and Maggie's trip, yet were so insubstantial they barely registered as ancillary characters, let alone secondary ones. Their purpose seemed to extend no further than to give Maggie and Mace a reason to meet and motivation to hook up. Not to mention, if I'd traveled across the country to spend time with my sister only to end up so blatantly ditched and clumsily set up, I would've been seriously brassed off.

That Maggie went along with her sister's disappearance, accepted it, and committed to going on a canoe trip she had no interest in going on with people she'd never met before, made those elements of the story seem contrived and forced and stretched my willing suspension of disbelief. And I never understood why either Maggie or Mace wouldn't question the weird people they were staying with at the cabin when they started to act like lunatics. No amount of common courtesy or polite behavior would have prompted me to put the responsibility of my continued existence in their hands after one night in their company.

When Mace and Maggie were in scenes alone together, this book shined. I loved their canoe trip, if not the fact that they proceeded to take it despite the misgivings and the wretched situation. I loved Barrett's deft, concise portrait of a woman betrayed by most of the men in her life and a man who understood her sometimes better than she understood herself. I thought the sex scenes were smoking hot and emotionally satisfying, and they spanned a believable range of human reaction and emotional state of mind. It's not a long book, but it's a hot erotic romance with sexual intensity and some true emotional gravitas. I enjoyed it.

Thank you. Your review took me completely by surprise! I loved writing the canoe trip scenes, especially since they're based on my canoe trip from hell last summer. Again, thanks.

Hey, Julia! It's horrifying to think you had to live through anything resembling that canoe trip...well...except that probably explains why that part was so visceral and believable and completely satisfying to read. I think I feel guilty now for enjoying that so much, knowing it came at your expense.

Casey mentioned two more titles I'm going to check out, too, so I'll be adding them to my Terrifyingly Tilted Tower of TBRs. I thoroughly enjoy your writing style. Intelligent, descriptive, and emotionally satisfying (and hot...lets not forget HOT).

I recently read this book after enjoying Julia's Beauty and the Feast and Incorporeal. I thoroughly enjoyed Pushing Her Boundaries. All of Julia's stories take the reader on a great journey. And this book was no exception. I couldn't not stop reading, especially the camping trip parts. And to later learn this was based on a true experience - shudder!

Hi, Casey. Thanks so much for commenting! I'm going to add Beauty and the Feast and Incorporeal to my Terrifyingly Tilted Tower of TBRs. Julia's writing style appeals to me and I look forward to reading more of her books.

Pretty wild about her basing that canoe scene on her own experience, wasn't it? *Shudders*

Glad to hear from you, Casey!
~ Tracy

Nice review, Julia. Certainly makes me want to read it.

Thanks for stopping by to comment on my review, Jacqueline! If you read the book, I'd love to hear your thoughts on it and hope you come back.

Tracy - our guides/hosts were worse, if you can imagine how that's possible. It was a harrowing trip, which we survived because we'd both read the book Deep Survival, Who Lives, Who Dies, and Why, by Laurence Gonzales. I swear we made the right decisions at every turn thanks to him.
Oh, and the napkin/cabin story - totally true. :)
Thanks all, for your comments!

Julia, I can only imagine how horrible that was. It truly sounds like a trip from hell. My sympathies, but thank goodness you read that book! And I can only hope you remembered your color! ;-)

Tracy - gave me great story material! I think my color was pink.

Return from Pushing Her Boundaries to Contemporary Romance

Return from Pushing Her Boundaries to One Good Book Home