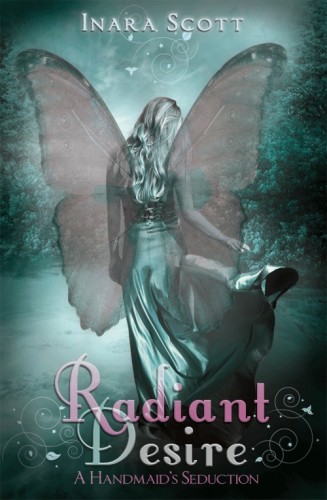 It was supposed to be an easy task, one that she'd done countless times before as a Handmaid of the Queen of the Fey. In punishment for the perfidy and betrayal of mankind, Kaia Verde and her three Faerie Handmaid sisters are regularly tasked by their Queen to cross over to the human realm. Each then seduce and enchant a man, then leave him humiliated and broken.

This time, though, is different. This time, Queen Zafira has choosen Kaia's target specifically. Kaia just doesn't know why.

The oddities don't end there, either. Kaia, being a Faerie, has always taken her irresistible nature and the power of her Fey glamour for granted. Men, after all, are simple creatures easily led around by their just-as-easily manipulated hormones. It's never not worked. The possibility that she could fail never even occurred to her.

Until she tracks down the elusive real estate mogul Garrett Jameson, finally gets him alone, turns on her Faerie charm...and he completely resists her.

It takes every ounce of her magical compulsion and a good long time to work on Garrett enough to get him back to her hotel room. His resistance intrigues Kaia. His inherent strength and honesty is unique and appealing. And he is dangerously handsome. Even as he finally, finally succumbs to her charms, Kaia realizes one very terrifying fact.

Kaia is just as seduced by Garrett as Garrett is by her. And the pleasure she takes in his arms, the thrills she revels in at his kiss, his touch, go against every single law Queen Zafira has in place for her Handmaids. And when the Queen finds out, there is hell to pay.

Kicked out of Faerie, stripped of her magic, with only twenty American dollars to her name, she's got one chance to get back into the Queen's good graces. She's got to find Garrett - again - and not just seduce him...she's got to make him fall in love with her, then break his heart. Nothing less will satisfy the Queen. Her wings will be stripped. She'll lose her soul, maybe her life.

And she doesn't even know what human love is...or how to engender it in the one man least likely to be happy to see her again.

Imagine my surprise, then, when I read a bit further and realized that I was wrong. It's not the type of book I thought it was. In fact, Radiant Desire is a highly imaginative, unique paranormal/fantasy romance that entertained me with its interesting characters and solid story, and also touched on some sweet and intriguing reminders of just what it means to be human and how important love is in the grand scheme.

I loved Kaia, which is saying something, as her somewhat heartless machinations at the beginning of the book made me very wary. Scott, though, struck the perfect chord with her character and drew out her evolution in a natural, organic manner that never felt contrived or rushed. Kaia became human and sympathetic fairly quickly, but it was her burgeoning understanding of the human condition that made her memorable. She had deep kindness in her, but she also had inner strength and pride that added a layer of fire and class to her personality. I couldn't help but enjoy her.

Garrett was a bit grimmer in character. Suspicious and wary, he was a hard nut to crack, but with his past, his issues were understandable. I can't say I was always thrilled with him, but I did like how helpless he was to fight the powerful impact of Kaia on his life. It wasn't until late in the book, though, that I was able to fully embrace him as the romantic hero of the story.

I thought the story surrounding the romance arc seemed a little stronger and more thoroughly fleshed out than the romantic elements themselves. Kaia's struggles, the threat she's living under, the whole of her situation, and the conflicts between her and Garrett were the driving forces of the book. There wasn't a whole lot written about the relationship between them once it started, as if the focus of the book purposely looked away.

I do wish the ancillary plot threads surrounding Rachel and Ted's relationship had been more expansive. I enjoyed them both and would have liked spending more time with them. That's not a criticism about the overall plot arc, though. It was still thoroughly enjoyable. It even had some twists and surprise developments that took me off-guard. Towards the end of the book, there were a couple of resolutions that seemed a bit abrupt and an epiphany that seemed too neat, but nothing to really dim my enthusiasm for the book.

In fact, it just made me wish the book had been a little longer, that some of the plot points had been explored to their full potential and the denouement had been more comprehensive. But then, I've always freely admitted to being greedy when I like a story. I'm excited to see where this series goes next.

"When people come to the flower shop, you know what they want to say to each other? Two things: I'm sorry, and I love you. That's it. They say it different ways and with different words, but it comes down to the same thing each time. So I think that's what it means to be human. I think it means taking chances and risking getting hurt. I think it means loving and forgiving."