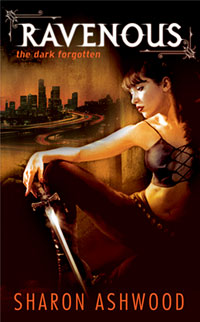 Holly Carver is a witch who makes ends meet by working small-M magics for the Three Sisters Agency. She has a partner, Alessandro Caravelli, the vampire that backs her up and keeps her safe when needed. He's totally hot, but Holly has a boyfriend and is getting ready to start college classes and doesn't completely trust vampires and their hungers. And she values her own free will too much to become either lover or snack to Alessandro. Doesn't mean he's not the first call she makes when she gets a job to clean a sentient house that's been kicking up some trouble.

At least, she was told it was kicking up some trouble. Truth is a little more intense - missing college students and faculty and reports of screams and weird lights. And the house isn't just sentient. It's malevolent. And it wants a big bite of witch. Holly can deal with the house - barely - but one thing leads to another and the house is just the first in a long line of increasing badness and danger.

A week ago all Holly wanted wanted was to do a job to get the money to pay for her classes and spend time with her boyfriend. Now she just wants to survive. Alessandro intends to make sure Holly gets everything she wants. And some things she doesn't realize she needs. Like him.

Ravenous started strong with a quickly-paced plot of danger and risk, nicely tempered with the sort of tongue-in-cheek and often self-deprecating humor that I personally favor - mostly from the protagonist, Holly. Even the prologue gave me a huge grin. Capitalizing on that humorous tone, Ashwood was able to quickly sketch out the world and a bit of the mythos without overloading the reader with exposition so the world building and character development felt very organic to the plot as it began to develop. Unfortunately, it wasn't all quite so blood and roses and there was an element that I felt was too-quickly brought up that halted that organic development and for me, the book never quite totally gelled after that.

While I enjoyed the concept of the world and the plot (the idea of sentient housing was awesome), and appreciated the primary and secondary characters, Ravenous stuttered a bit when the vampire queen Omara and Alessandro go from discussing paranormal murders on the town's college campus to Omara bringing up the Chosen legend, a legend about vampire mates that most vampires believe are nothing more than fairy tales. I had more than a few issues with that. The idea of a Chosen mate has been so overused in various incarnations in paranormal romance and fanged fiction. What little originality or unique spin on that oft-utilized romantic catch-all attempted in Ravenous was quickly stifled by the jarring out-of-the-blue mention and lack of connection to other topics during that conversation. It left me feeling like the entire Chosen topic was dealt with in a very heavy-handed and obvious manner. A sixty-foot, flashing neon sign pointing at Alessandro and Holly would've been more subtle.

There's not much subtlety to be found in Ravenous. That's not always a bad thing, but in this case, I was left feeling like various plot points kept being set up as conflict for the characters, then quickly knocked down as easily as if they were bowling pins, without a lot of impact on the characters involved as the story progressed. So many plot points and twisting developments, in fact, that there never seemed to be time to fully explore the ramifications or nuances of one before the next set was placed. It makes for a fast read, but doesn't allow for much depth or substance in the plot.

That being said, there were quite a few things that I liked about this series opener, not the least of which is the ramifications of the Castle and the potential for lots of meaty conflict with its inhabitants. I found the concept behind the interdimensional prison to be quite intriguing and hope to see that developed further. I also felt for Mac and while I wish his story had been given more room to make more of an impact here, I liked it very much. I enjoyed Holly and thought she did a reasonable job as heroine - and that's saying something, because the female leads are usually the first thing I don't like. I also liked Alessandro, but I was a little disappointed in the dearth in his development and the sort of cursory attention given to his relationship with Holly. I prefer a romance that develops with more attention and work given to that development, and this just wasn't that sort of romance. It wasn't quite to my tastes or preferences. I still enjoyed it.

I was very pleased with the promise I saw for a series here, and think Ashwood is off to a good start. I have no qualms at all about her writing style and her ability to add lyricism and humor to her prose to keep characters and situations fresh and hope that's a trend that continues with Scorched. Especially as I've already got it sitting in my To Be Read pile. I was left with a favorable feeling towards this book and look forward to continuing the series with the hopes that a few of my issues with this book won't be carried over to the next.