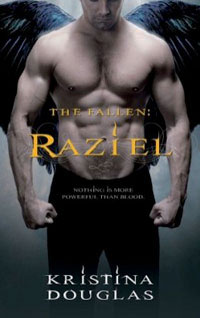 Allegra Watson's life ended with the broken heel of a shoe and the scream of bus brakes. Confused and disoriented, she fought the tall, gorgeous man who took her arm and led her away from the scene of her death. As they slipped from the only world she'd ever known and he drew her towards a crack that opens up in a rock wall, she musters up the will to fight the fate that had cut her down so completely. Then, the implacable but gorgeous man pushed her through the opening and the fires of hell reached out to grab her.

As a Fallen, Raziel had shuffled mortals off to their eternal reward, be it fiery or fair, for millennia. He doesn't kill them, but pressed into service by the Archangel Uriel, he and his Fallen brethren gather the few who don't automatically transcend and put them on the path. The grim task is the only one that can maintain the detente between the Archangel and the Fallen he so detests. Never in all those many years had a human ever fought Raziel. Never in all those many, many years had he set a human on his or her way and saw the fires of hell when the human should have been ensconced in the comforts of heaven. Without thinking, he grabs Allie back, and sets into motion events that uncover a treacherous plot by the unscrupulous Uriel, the Archangel who would destroy all Fallen, and humankind as well.

There were several good points to this debut book by author Kristina Douglas. I liked the idea of the Fallen being the good guys and loved that Lucifer is their potential savior, and I thought the mythos of the Fallen, Urial's machinations, and the explanation of God's absence were well conceived and explained. The Nephalim were gruesome but effective villains - and another nice touch. I liked Allie, and thought she was a decent protagonist. While she came off as a bit superficial and flighty at first, I appreciate realistic faults, and the issues she had with her body and self image were believable. I also loved how she stood up for herself against Raziel throughout the book, and her evolution as she became more and more aware of her circumstances was well paced and felt organic to her character.

I wasn't as fond of Raziel, who I found to be forbidding, insulting, obstinate, and inflexible for far too long into the book. It damaged the development of the romance, and even when there was the inevitable shift in him, I found it hard to actually like him, or sympathize with the plight of the equally unlikable Fallen as seen through his eyes.

The plot was okay, though it was a little thin, and the world building was sufficient, if not extraordinary. Actually, that's one of the main problems I had with this book. It was okay, but there were so many missed opportunities, and what could have been a genuinely fresh and exciting series opener didn't quite pull it off.

Secondary characters were given almost no definition and what was there didn't make any of them seem very pleasant. In fact, The Fallen all seem like pretentious, sullen, agoraphobic jerks who don't like humans all that much, and their wives or chosen or mates or whatever seemed, much like Allie called them, Stepford wives. The focus given to the transitory nature of the bonds between Fallen and their women also bothered me...it seemed to me to lessen their significance of their love for each other. Every time the brief (to a Fallen) lifespan of a wife or the mention of multiple wives over the eons was mentioned, I felt saddened. It was a very unusual choice for a romance novel.

There was one thing about this book, however, that put the serious kibosh on liking it very much, one aspect that didn't work for me on any level: the shifting first person points of view in the narrative. But not only did the narrative shift between Allie's and Raziel's perspectives in a weird way that lacked clear delineation, but there was also first person point of view from Azazel's perspective and scenes of third person omniscient between him and his wife Sarah. I've never seen anything quite like it, really, but I'd prefer not to see it again.

All-in-all, I was left feeling like Douglas played it a little too safe or told too conservative a tale in some areas, but tried too hard in others. I wish some things had been better explained, and some not quite so belabored. I liked one of the main characters, but not so much the other. The execution worked in some areas, not at all in others. And all this combined to provide a book that I didn't think was so bad, really, but wasn't all that great, either.

But I did agree with Allie...they seemed like vamps to me, too.