Problems and Potential Both 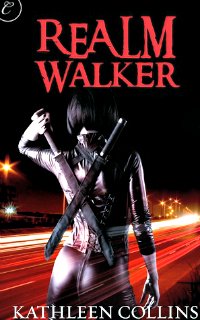 In a world that's been knowingly coping and coexisting with magic and magical creatures since the Rending, half-dark fae, half-mage Juliana Norris is a Realm Walker, an officer of the International Law Enforcement Agency that polices the Altered. She is most often assigned to tracking and, when necessary, hunting those nonhuman creatures who are causing trouble with their human neighbors.

Given as she can see the signature that every being leaves as it travels along its way, sort of like a magical scent trail, and identify them by their colors, she is uniquely qualified for the job. The only creatures she can't see, that leave no signature behind in their wake, are demons. That does, however, make more than a little problematic the fact that someone has summoned one and set it on a course of death and destruction straight at Juliana.

Then there's the vampire she once loved, Thomas Kendrick. Seven years ago he took her as his mate, then disappeared from her life before the blood was even dry. Losing him nearly destroyed her. The aftermath of his leaving changed her irrevocably. Now he's returned and is of the opinion that it would be the perfect time to force his way back into her life. Because she obviously doesn't have enough to worry about.

This series debut by Collins marks the second time in a handful of months where I had to stop a few chapters into a book and make sure there wasn't a preceding book or novella, or even a main series from which this one spun, because I felt like I was missing a lot of previously laid groundwork almost from the very beginning. There's plenty of tidbits of information about things that happened in the past to set up the story, but the characters, their backstory, and significant elements of the world-building are disclosed in a way that seemed far better suited as reminders than introductions.

Julianna and Thomas have a lot of personal history, that much is plain, but I never felt like I was given a good grasp of it. Details about their past were either glossed over or doled out in drips and drabs throughout the tale and I couldn't shake the feeling that I was supposed to have already known the whole story before I started the book. Though I'm not really sure how.

That problem wasn't limited to Thomas, either. All of Julianna's friends and acquaintances suffer similarly. There are several who have obvious history with her, but without the all-important context to let me know how and why they were as valuable to her as we're told they are, I never really felt any of those connections. That put a big crimp in the emotional impact of several crucial scenes as the conflict with the Big Bad heated up, and it confused me in general when it came to characters like Raoul and Michael.

And not for nothing, but I'm still not sure how I feel about Thomas. I was completely thrown by the weird way he showed up and inserted himself into Juliana's life, offering sketchy detail on what he does and doesn't know about her origins and her life since he left and making some pretty high-handed demands with all kinds of attitude. My first impression of him was of an overbearing, utterly egotistical asshat, and while that did improve the longer I read, it didn't completely go away.

Maybe it would have if he hadn't kept referring to Juliana as "his bride." Ugh. Not only did that bug me with its repetition, it seemed pretty offensively objectifying to me. Like he didn't see her as her own person with her own identity, she was just his bride. It was weird. Not sexy. Weird.

On the other hand, it quickly becomes clear that Juliana is absolutely everything to him and he would do anything for her. I would have preferred seeing a bit more of that in application, though, and a smidge of honest communication wouldn't have been remiss, either. I'm starting to wonder if there is just no other way to breed conflict between two stubborn, self-sacrificing characters, as often as that has been the sole source of major relationship conflict in stories I've read lately. Still, his devotion to her did temper my negative opinion of the guy and kept him from being utterly unlikable, but he was definitely not to my personal taste in romantic hero types.

There were, however, some very nice things going on, too. It was nice reading an urban fantasy series debut that didn't make me want to poke the heroine with something sharp. First time that's happened in a while. And no inklings of a love triangle, either, which is virtually unheard of in the genre of late. Those were two big positives in a book with a well-conceived (if not perfectly defined) world and solid story, and that's what kept my feelings generally positive overall as I dealt with some of the less favorable elements.

I actually liked Juliana. She's not the most original character, is in fact fairly typical for the genre. In Juliana's case, thankfully, her emotional maturity seemed slightly higher than that of an average twelve year old (a welcome change), and she's more palatable than most I've read recently. She's certainly the sort of smart-mouthed, kick-ass rule breaker I seem to gravitate towards most in the genre. You know the sort: she would sacrifice herself to save anyone she considers "hers" but guards her heart and her secrets like a jealous lover and doesn't actually let anyone in very far.

It's a common malady in urban fantasy heroines, but one I've always sort of enjoyed, or at the very least, never minded.

I did enjoy the glimpses of the world I got in this book, and there were several secondary and ancillary characters with nice page presence, though Michael in particular needed a hell of a lot more explanation. There is also a solid plot conflict going on around and in addition to Juliana's personal crisis with Thomas. It lacked sufficient setup and didn't come close to answering all my questions, especially after that rather odd but revealing climax, but on the surface it provided plenty of action and certainly a high body count.

Without the sufficient framework for everything that went on in this book, though, it just wasn't quite executed well enough for me to feel completely satisfied with the story as a whole. And did anyone figure out how Juliana knows who her father is if she can't remember anything from her first twelve years? I think I missed something there.

Well...I missed something in a lot of places, but that one still niggles me.

The plot execution may have been a bit odd, and it had some pacing issues and abrupt transitions, inconsistent progression and a general lack of the sort of detail found in the more complex urban fantasy series, but it still managed to keep me entertained. With more fleshing out in some crucial areas and another fifty or so more pages this could have really built into a gripping, multi-layered, complex tale with memorable characters. It didn't quite reach that level this time, but the potential is definitely there for the series.

Return from Realm Walker to One Good Book Home