Questions Answered But Others Remain 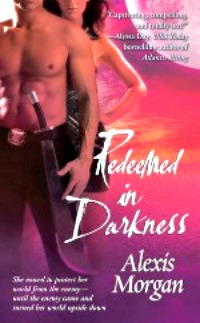 Colin Finley, also known as The Professor amongst his Paladin brethren, is doing Barak q'Arc a favor. During the events of In Darkness Reborn (Paladins of Darkness, Book 3), Barak was compelled to rush to the rescue of his beloved, leaving Colin with a letter for his sister Lusahn who he was trying to contact to ask for help with the issue of smuggled blue stones that have been pouring out of her world and into our own at the expense of many Other lives. Colin was happy to help Barak out, and not only because he's come to realize that the displaced Other is a male of honor, but because Lusahn has been on Colin's mind since their small battle not too long ago and he was willing to risk crossing the barrier to find out if he was just as prevalent in her thoughts, as well. When the barrier falls and he steps into the cold, gray world so many Others have tried to escape, Lusahn is there, preparing to end the life of her brother the traitor. Colin manages to talk her into allowing him to live, and can probably get her help to investigate, then finally stop the smuggling, but how can he ever convince the prickly Other that she needs Colin, not just as a warrior, but as a man?

Picking up right where the previous novel left off, this is probably the least likely of the first four books in this series to read well as a stand-alone novel. For the first time, we get a look into the realm or dimension that the murderous Others have been fleeing from, and thankfully, we finally get an answer to a lot of questions about them as a species. These questions have been plaguing me from the first book, so I was particularly glad to get some answers. Unfortunately, there are still too many questions left unanswered (how does Lusahn know how to translate the passage of time by her world's increments into our own? How do Others learn our language?), and a few significant contradictions to previous mythos pop up in this book as the worlds that Morgan has created start to grow beyond their former definitions. There wasn't a particularly deep plot in this book, as the focus was more on Lusahn and Colin at first learning to trust each other, then quickly turned to the obvious feelings they have for each other, but there were a few pleasant surprises - most notably the introduction of the children Bavi and Shiri.

Still, this book at least started to scratch the surface of a few very important issues that are going to need to be addressed if this series is going to continue with any potential for a final triumph in the overall arc. That overall series arc has taken a bit of a crooked path so far, and more and more complications have been thrown into the mix. So many that I worry that the arc will start to become overwhelmed by them...though perhaps it already has. Enemies have become allies, ravening monsters have become beloved mates, and problems like the Paladins turning rabid after one death too many have gotten lost in the shuffle. For all of this muddled confusion, I can't say the series is a favorite of mine, but I do find the books entertaining and I did enjoy Colin and Lusahn's story.

We're finally shown a glimpse of the Others' world, and while it seems dreary and colorless...as do the people of it...we're not given more than surface appearances, and that keeps this novel at a more superficial level than I would've liked. There also was very little offered to clearly differentiate Others from humans - beyond, of course, the different worlds. I would've liked to have seen some cultural or creative differences. There was some progress made and things I did like, however.

Finally we find out that Others call themselves the Kalith. It's a pretty name with a pretty meaning. For the first time, the moral ramifications of the genocidal slaughter - justified or not - of the maddened Kalith has finally been brought into question when Colin started to question the fate of those left orphaned and alone. So too, Paladins are finally starting to wonder how the blue stones even came to humans' attention and the idea of humans sneaking into the Others' world has finally been broached. These are all things that needed to be given attention and I was glad to see it.

I can't say that there weren't problems - there were several big ones I could mention - and I'm still not convinced that Alexis Morgan has a very clearly defined path in mind for this series. If she does, it's not coming across to me as a reader. Still, I've enjoyed Barak's and Lusahn's stories more than the first two of the series and while I have no idea at this point where the series is going, I'm still enjoying the ride on the way.

Return from Redeemed in Darkness to Paranormal Romance Genre

Return from Redeemed in Darkness to OGBDA Book Review Home