Regina in the Sun

A Sensual and Dark World 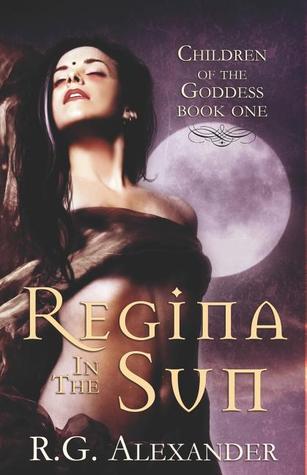 Series:   Children of the Goddess, Book 1

Regina is Unborn, a vampire made, and as such she's scorned and hated by the Trueblood. Still, she risks everything, even death from a wound inflicted by dark magic, to make it to Sanctuary and the Sariel family. The Sariels are a powerful and respected bloodline that wear the mantle of clan Mediator, a position of respect and authority. Regina has to warn the Mediator about the return of an old and feared enemy, Loups De L'Hombre, the Shadow Wolves before they can begin their carnage. Shapeshifters twisted by the ancient and evil magics they wield, they are a formidable foe long since thought extinct. She must get to Sanctuary to warn others and get help, as the Shadow Wolves will first roll right over Reggie's Deva Clan, a clan of misfit and shunned Unborn but the only family Regina has left, and they will leave nothing alive in their wake.

Reaching Sanctuary gains Reggie more than she'd ever dreamed, and she's stunned when Mediator and scion of Sariel family, Zander Sariel, takes her blood as he offers his in an effort to save her life...and finds his grathita. His blood-bound mate. But there are repercussions to the purest line of Trueblood taking an Unborn mate. Repercussions that may lead to the death of them all.

With a highly imaginative, complex, original, and creative mythos as the solid base for this erotic paranormal romance, R.G. Alexander kicks off her Children of the Goddess series with a smokin' hot explosion of sensuality, emotion, and story. Regina in the Sun is steeped in vampire, human, and werewolf history, ripe with a depth of exposition and magical creationism that I've never seen rivaled in a less mainstream novel. There is a weight and texture to the tales told of the origins of species and characters here that add flavor and lend a unique and much appreciated sense of realism within the framework of the book.

The characters are likable and are imbued with a meaty depth of personality, and while Regina and Zander are heroine and hero, a strong stable of fully formed secondary and ancillary characters are also well represented. I enjoyed Regina and her sense of independence and fiery spirit and appreciate how Alexander blended the perfect amount of vulnerability and yearning into her to keep her grounded and real. Zander is noble, strong, and proud - and insanely devoted to the one woman he would do anything for. His brother Lux was fun...and wow - sizzling to the extreme, there, and even Liz and Nicolette and Arygon, while briefly featured, felt surprisingly three dimensional and organic to the story and world.

My issues with the book started to pop up in relation to the plot and the pacing, which gave me some problems. Admittedly, I wasn't expecting such fantastic world building and mythos, but once I got that, I wanted to be equally wowed by the plot and execution of the conflict of the story arc and unfortunately, I just wasn't. Perhaps a bit too much time had been invested into the mythos as Alexander built her world for the series, or maybe there was a little too much attention paid to the sexual encounters (I'd argue against that one, honestly, because...yum). Frankly, though, I'm not buying either of those as the reason. I just don't think the book was long enough at 200 pages to do it all and do it all well, and that's a real shame because Alexander has definitely proven herself capable of some pretty impressive writing.

Instead of a well-drawn and tightly paced buildup and execution of the conflict plot arc, it was only touched on here and there through the book, and at the height of battle was so quickly commenced and perfunctorily concluded that I was left feeling a little agog. The building blocks were all there in this book for a brilliant opening salvo on the paranormal romance genre, but it needed around 100 more pages to allow for a more thorough development of the antagonist, the threat he posed, and battle to reach that goal. And there could have been more depth and time given to the development of the relationship between Regina and Zander. I'm not saying there wasn't enough, but it did feel rushed in places, with some random jumps in time and some issues with transitions which could have been easily resolved by adding some length to the novel.

I thoroughly enjoyed Regina in the Sun, don't misunderstand me. In truth, the issues I have with the book have little or nothing to do with what I've read. The problem is my disappointment over what I didn't read. It was good - a very solid read. It could have, though, been exceptional.

Return from Regina in the Sun to Paranormal Romance Genre

Return from Regina in the Sun to OGBDA Book Reviews Home