Billy and Kristen Shine Together 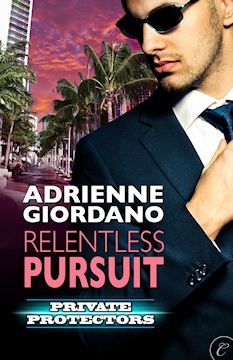 Billy Tripp knows he messed up. He forgot to renew his passport and ended up on his boss' shi...er...shiitake list. Now, instead of feeding his inner adrenaline junkie in some balls-to-the-wall, no-guns-no-glory operation overseas, he's stuck working at Taylor Security's equivalent of a behavioral time-out in a swank hotel in South Beach.

The thrill-a-millennium assignment among the rich, ridiculously tanned, and infamous? Babysitting a necklace, an assignment that's the mental equivalent of watching grass grow. Disgruntled and bored, tension is starting to ride Billy hard. And that's particularly dangerous, what with Billy's unfortunate...issue.

Then she walks into the ballroom, and Billy can't help it. He stares.

If you had spent the majority of your life feeling like a fat Amazon compared to your perfectly gorgeous, party-hard little sister, you'd have self-image issues, too. At least, that's how hotel heiress and manager Kristen Dante rationalizes the hate-on she's got with her height and fat...er...lush figure, so being stared at by Mr. Tall, Gorgeous, and Monosyllabic is more than a little disturbing. Fortunately her job doesn't allow her to stand in one place for too long, and she's called away to deal with an issue before she totally freaks out about it.

Unfortunately, Billy approaches her while she's dealing with a security problem, his interest piqued by the flashing lights of the cop cars in the parking lot. One of the hotel guests has reported his car stolen and as soon as Billy hears that, Kristen can practically see his ears prick in interest.

Suddenly, Kristen can't help but wish she could go back to his silent stare routine, because frankly, the only thing worse...and sexier...than a quietly intense Billy is a take-charge, mouthy Billy. Which, she realizes with amused horror, may actually be his default setting. While he's giving her the full court press and she's torn between duty and attraction, Billy's investigation into a growing list of car thefts starts pointing to an international smuggling ring.

That's about when whomever is responsible makes their tragic, fatal mistake. They try to take Billy out of the equation. Now they're going to get a good, hard look at exactly how former Army Ranger Billy Tripp defines "relentless pursuit."

I'm so glad I didn't eschew picking up the third book in Giordano's series when I had the chance to read Risking Trust a few months ago. Not only would I have totally missed out on the sexy fun of this romantic suspense series, but I might never have come in contact with the incomparable Billy Tripp. And that would have been a real shame.

Irreverant, incorrigible Billy Tripp. Part adrenaline junky, part lunatic, both a patriot and a man who loves his mother, Billy Tripp suffers from and is embarrassed by what has been diagnosed as borderline (yeah...not so border) ADD. He's hyper, often hyper-aware, and is much better at blowing things up and pushing people's buttons until things explode than he is at controlling his mouth, his attitude....even his actions.

He's like a frenetic pit bull in a kick-ass warrior's body, and when he does focus on what - or who - he wants, he is relentless. And he wants M.H. He wants her bad.

All of that means more fun for me, because I thought Billy was awesome. It may be less fun for Madam Hotness herself, because Kristen spends most of the book torn between mortification at Billy's obvious attraction and wild behavior, and getting a warm, sexy little thrill over his endearing, honest, non-filtered thoughts and antics. Their relationship was a total blast.

Between Billy's mental and behavioral issues and Kristen's problems with body image, I thought Giordano did an excellent job creating two perfectly imperfect and often difficult characters who were just right for each other. It's rare for me to like female lead characters as much as their male counterparts. I did here. Not only did I think Kristen's personal issues were realistic, they never once diminished her character's independence or professional confidence, nor threatened her unshakable belief in her own intelligence and her abilities as the manager of an exclusive hotel. I liked that.

Giordano may write gorgeous alpha men, but she also writes confident, powerful women who are quick to rely on their brains and recognize their strengths, using both to their full potential. The way that Kristen managed Billy - a guy who desperately needs a firm hand to know where the limits are - was nothing short of fantastic. And the way he manages her insecurities was nothing short of brilliant.

On their own, they're layered, fallible characters with personality traits in both the plus and minus categories. Together they fit like exquisitely crafted puzzle pieces, as if they were meant to lock together in perfect compliment to each other's needs. Their relationship was more than the sexy heat that Giordano brings to the story, though that surely didn't hurt. But they were just as remarkable working together as they were loving each other.

Held up against all that, the suspense elements of the storyline would have had to have pretty remarkable to snag much of my attention in this book, and frankly, that wasn't the case for me. I'm sure car thievery, even on the scale indicated in this book, is a serious issue worthy of attention, but it didn't do anything for me personally and added very little in the way of suspense to the read. I ended up not really caring one way or the other about who was stealing the cars. Or why.

Usually, when either the suspense or the romance elements of a romantic suspense read go awry for me, it tempers my overall appreciation of a book. That wasn't what happened here. I loved Billy and Kristen so much, and so fully adored every moment of both their personal and professional relationship, that I couldn't help but like this book. The suspense elements may not have added anything to my reading experience, but it didn't detract much from it, either.

I've become a fan of this series, more specifically the way that Giordano creates and evolves her characters. Hot alpha males, intelligent, competent women, and both with their own quirks, peccadilloes, and insecurities...what's not to love? Add in a more personal or emotionally significant suspense thread, and this book would have hit every one of my Happy Reader buttons. Even without it, this was a great read.