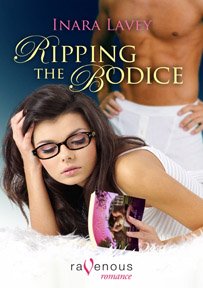 When her boyfriend calls at the last minute and blows off the vacation she was so looking forward to, Cassandra Devon quickly reevaluates both the relationship and her plans. She dumps the boyfriend, packs her bags, grabs a bunch of the classic books she loves - wildly adventurous and swashbuckling romances that never fail to sweep her away from her average life - and heads to San Diego to meet up with her best friend Valerie. Nothing would please her more than to spend a couple of weeks of fun, friendship, and relaxation. And, of course, reading. Lots and lots of reading.

When she gets off the plane and hooks up with Valerie, she comes face to face with the ruggedly handsome but perfectly annoying Connor, the best friend and business partner of Val's cousin Raphael. He's everything Cassandra would never go for in a man. Raphael, on the other hand, is just what she's looking for. He's all things swarthy and genteel, and so gorgeous he looks like he just stepped off the cover of one of her beloved bodice rippers. And she's thrilled when Raphael seems to be equally interested in her.

In fact, Cassandra would be contentedly planning her HEA with Raphael if it wasn't for the odious Connor. Not only is he rude, he's got boundary issues - the sort that have him waltzing into her room when she's in the bath, then not having the decency to respect her privacy when she gets out. Then he's all with the kissing and sparring, challenging her at every turn, getting her blood up. The fiend.

The longer her vacation continues, the more Connor gets under her skin, until she's practically spitting at him every time he shows up...which is all the time. Problem is, all that conflict has Cassandra questioning her own preferences. Could it be that the hero-type she thought she wanted can't hold a candle to the bad boy she can't help but need? Or is Cassandra's HEA destined to never escape the pages of a book?

After the past couple of books I've read left me yearning for some romantic comedy, I needed Lavey's Ripping the Bodice to cleanse my reading palate and lighten my spirits. It was partially successful in that it's a relatively harmless and humorous romance that made me chuckle out loud in a few places, but it didn't appeal quite as much as I was hoping. I can't say the fault lies with the story, exactly. It's just, as I was reading, I realized I'm not a big fan of bodice rippers. That was a problem because I had a hard time relating to the character who seemed to turn nearly every moment of her life into a scene from one.

Instead of being amused by the tongue-in-cheek, exaggerated fantasy life of Cassandra, I was overwhelmed by the number of times the book slipped into italics and flounced around with long scenes of purple prose and over-indulgent scenarios. A few here and there with much shorter length would have been sufficient to make the point and keep the pace of the contemporary romance development from floundering. Not to mention that the scenes took page space from the much-needed character definition and plot development. As a result, too much of the book failed to dip beneath surface issues and conflicts and remained two-dimensional.

That was a shame, because there really wasn't anything wrong with what was there outside of Cassandra's dream world. The characters were likable, Cassandra was quirky with a hint of snarky steel that I enjoyed, and there was genuine chemistry between Connor and Cassandra from early into the book. I can't ask for too much more than that. But that's exactly what I feel I got...too much more than that.

I didn't mind the predictability of the plot. I wasn't expecting any new ground in romance fiction to be laid with the book so the fact that a reader can see the end coming from a fair distance away didn't bother me. The irony is that the parts of the book that went awry for me were the unexpected parts; the dream sequences, if you will, that didn't appeal. By the end of the book it felt like I'd skimmed a good half of its content to avoid the escalating fiction-within-fiction scenes. As a general rule, that's not a good way to feel satisfactorily entertained.

Return to top of Ripping the Bodice