No Risks in Enjoying This One 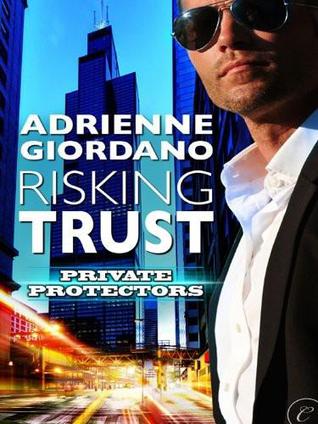 Once upon a time Roxann Thorgesson trusted Michael Taylor with her heart, until he left her without warning or explanation. It had devastated her. Then he married another woman and she was utterly annihilated. But that was twelve years ago.

Now Roxann is reeling from the sudden death of her father and struggling under the weight of the responsibility that comes from taking control of the second largest newspaper in Chicago. She's over Michael Taylor. Mostly. Now she just loathes him to the depths of her soul.

And yet, in the darkest of nights when she's feeling the most vulnerable, she still wonders...Why?

Roxann is stunned when Michael makes the news in connection with the murder of his wife. Then she's flabbergasted when he shows up in her office. The deal he offers her, however, stops her cold. If she agrees to help him find out who killed his estranged wife, he'll give her paper the exclusive on the story and an all access pass into his life.

Security specialist and business owner Michael Taylor isn't the same person who walked away from Roxann twelve years ago. The one thing that hasn't changed is his regret for past mistakes. Mistakes like leaving Roxann. And marrying Alicia. But now Alicia is dead. Though they had been in the middle of a very acrimonious divorce, and she had destroyed whatever tender feelings he had for her years ago, she still didn't deserve to die like she did.

And he sure as hell hadn't killed her.

The cops aren't looking at anyone but him as a suspect, though, and he needs help. He needs Roxann's resources to help him get answers to some important questions. Michael knows that to find out who killed Alicia they will have to discover why she was killed, and he has neither the contacts nor the freedom from scrutiny to do that on his own.

When their investigation starts to point towards powerful men in powerful positions, Michael starts to worry about Roxann's safety and the risks she's taking to help him. If anything happens to the woman he's never stopped loving, searching for the truth and trying to clear his name may end up being the two biggest mistakes he's ever made.

Lately it seems I can hardly toss a pebble at the romantic suspense genre and not hit ten series revolving around some sort of security agency employing a wealth of gorgeous and hard-bodied ex-elite military men who moonlight as über-alpha romantic heroes. While I certainly have no complaint about the gorgeous and hard-bodied, I would prefer a bit more variety. Surprisingly, Giordano provided exactly that in this likable combination of second-chance romance and murder mystery, even with the inclusion of the ubiquitous security firm.

Michael and Roxann are both strong and sympathetic characters with genuine chemistry. They have a wealth of emotional baggage that complicates their relationship evolution in lots of fun ways. Both have the sort of depth engendered by weathering the personal tragedies that define them. Both are keenly intelligent and highly competent in their fields.

I loved that Michael is the one in trouble, that he needs Roxann's help instead of Roxann being the direct target as is so often the case in the genre. She has other trials and tribulations whirling around her, putting her into some pretty tight places, but in relation to the murder, it's the investigation she's spearheading that matters more than she does. Maybe I'm splitting hairs about that, but it felt like a nice change from most romantic suspense in which the female lead is the primary target.

I also loved the slow buildup of the romantic elements between her and Michael, and their verbal sparring was a lot of fun. Giordano did a great job actualizing Roxann's complex and conflicting emotions over the loss of her father and Michael's reentry into her life. The grief, the lack of trust, the wariness, and the hurt all made sense to me in most cases. There were one or two times I felt her relationship with Michael had progressed past the point of the knee-jerk accusations Roxann hits him with, but overall her emotions - and his - felt very organic to their past and characters.

The suspense elements and multiple story threads relating to Roxann's job and personal life blended well and the narrative had a nice, steady pace to it. There were even a few plot twists that caught me by surprise. One of them, though, gave me some problems. As much as I enjoyed the investigation, I was disappointed in the identity of the killer. For me, it just seemed like one step too many over the line into excessive tragedy for everyone connected to the case. And very little of the emotional fallout from that reveal got addressed to my satisfaction, a lack which seemed glaring.

If I had to jump into a series at the third book, though, I picked a great series to do it in, because while Risking Trust has been released as the third installment in this series, the story of Michael and Roxann is actually first in the series timeline. That, as it turns out, worked great for me. Not only did it read just fine on its own, but I can go back and start at the beginning of the series and have events still be in chronological order. I enjoyed this book and these characters to such a degree, I may very well do just that.