Breaking The Rules Is Such Fun 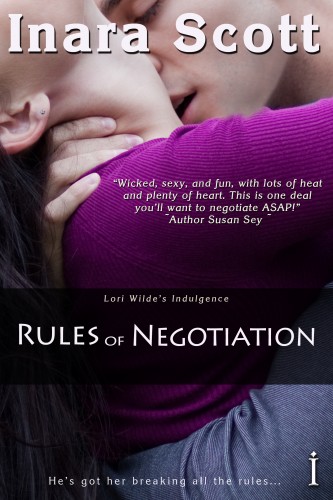 Forget the Greeks, beware CEO's bearing gifts. Of all the rules of negotiation that lawyer Tori Anderson lives by, that's the one she should have kept in mind. A tricky contract deal on the cusp of being signed is suddenly altered and improved, and not at the request of her client, but by Brit Bencher, CEO of the corporation procuring the acquisition. To say that's an unusual occurrence would be an understatement.

If that didn't make her wary enough, Brit tosses his company's lawyer out of the room and starts...flirting with her? What kind of Bizzaro world has she suddenly stepped into? All Tori knows is that it's making her defensive and wary. She has no idea what Brit wants with her, especially when he asks her to dinner.

Brit has an ulterior motive, it's true. One look at Tori, though, and he knows she's a worthy opponent. His plan is simple and his motivation is well-intentioned. What could go wrong? He doesn't see the glimmers of vulnerability beneath Tori's fierce exterior. He's not looking for that, it would ping his conscience too much. After all, when a man is planning to woo a woman in order to get an in with another of her clients, he's not exactly acting honorably. It's justified, though, if he can help his sister. Anything is.

Except there's a fly in his oily ointment. Playboy Brit isn't expecting the connection that springs up between him and Tori. He doesn't expect to like her as much as he does. He's unprepared for the pull of intense attraction. And suddenly Brit's wavering between grinding desire and crushing responsibility, relieved that Tori at least doesn't know why he first pursued her.

And we all know how long that's going to last.

What a nifty bite of sexy, fun, touching romance! I love the characters that Scott writes, they have realistic issues and very human failings and they always strike a chord in me. It's not so much a matter of them being realistic or believable so much as it is the real sense of genuineness about them. They make sense to me. They're exactly who they should be given their backstory and their life, and they act, speak, and think accordingly.

I'm probably explaining that badly but it's a very good thing, and something I find surprisingly rare in romance fiction.

The plot of the book didn't seem groundbreaking to me, but Scott's sharp writing and my appreciation for her characters made it quite a tasty little read. Not only did I really enjoy Brit and Tori as individuals, they had a chemistry that was sometimes contentious, but always spicey and hot. They fit very nicely together and I enjoyed seeing them go toe-to-toe as much as I did when they were lip-to-lip.

I really loved Tori. Her intelligence and the blend of emotional insecurity and steely strength really worked for me. I loved how she figured Brit out and the actions she took as a result; I respected it and got a chuckle out of that whole morning at the ball field. Call me twisted, but few things tickle me more than a male who's royally screwed up...and who is completely oblivious to it.

The secondary characters were great and added quite a bit to the story despite an economy of attention. Seeing Brit's brothers and sister, niece and nephews helped explain a lot about who Brit is and what he's spent his life focusing on - and why. The sibling relationships felt very natural and organic...and charmingly frustrating as only sibling relationships can be. It also created a bit of a vacuum on Tori's side, highlighting how barren her life is. Which, really, is the point.

I do wish that Tori's fanaticism with her work had been even more clearly delineated throughout the book and I wish her mother's storyline had evolved a bit differently so the end didn't feel quite as conveniently timed. That said...there were some gut-wrenching, tear-inducing moments late in the book concerning some journal passages. Wow - they packed a hell of an emotional punch. I have to admit, it had me in tears and touched my heart. Nicely done.

In fact, the whole read was nicely done. Sexy, sweet, with moments of humor, tension, and sorrow, the emotional gamut was well-run throughout. I liked it very much. And for the record, I'm not at all surprised that Scott wrote something that charmed me, entertained me, and made me smile. In my experience, that seems to be a habit she has. May she never break it.

Return from Rules of Negotiation to Contemporary Romance Genre

Return from Rules of Negotiation to OGBDA Book Review Home