Running in the Dark 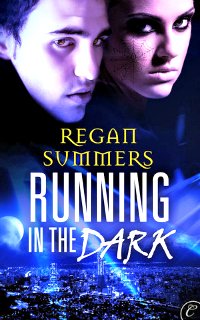 She tried retirement. It didn't agree with her.

Vampire courier Sydney Kildare survived a turf war in Alaska and retired to Hawaii, a wonderfully vampire-free state. She was enjoying island life just fine (being bored senseless) until the goons of a sucker with a grudge showed up and tried to kidnap her. That's about when she realized the danger was the most fun she'd had since she retired.

Now Sydney is in Chile with her vampire sorta-boyfriend Malcolm, who had been sent to South America to manage the holdings of master vampire Bronson in his continued absence. Sure, Sydney can't speak the language beyond a few important phrases, she's stuck with the low-money newbie routes at her new courier agency, and the car she's driving is a real POS, but the thrill being a runner is universal.

All in all, life is going pretty well for her. At least it is until vampires on her route start dying under highly disturbing circumstances and an old enemy of Malcolm's decides that the best way to piss him off is to break the little human courier he's so fond of. As she is that little human courier, that's a plan that just doesn't work for Sydney. Whether or not she'll survive long enough to lodge a formal complaint is another matter entirely.

There's just something about Sydney Kildare, and because of her, this series, that makes me smile. There is a lot of charming...and sometimes not-so-charming quirks in her character. She's an inveterate adrenaline junkie, but she's not foolhardy with her safety. She runs messages, a dangerous occupation on lots of levels, and that puts her into direct contact with vampires she mostly fears and dislikes, but she is hyper-vigilant around them. She keeps everyone she knows at a distance and looks at the world through street-wise, sometimes jaded eyes, but throws herself into a relationship with a vampire she doesn't exactly know that well.

Those sorts of quirks, when paired with an inner monologue peppered with sarcasm and attitude, make her a very appealing and interesting heroine. She's certainly not out to save the world, just survive it while making the most money possible. I have to admit, her prosaic approach to her life appeals to me.

I like the stories Summer writes surrounding her, too. This is not a warm, fuzzy world. It's dark and gritty, and while vampires may have an excellent PR firm, Sydney is under no delusions about their nature. That's probably a good thing given how often she seems to find herself in situations that show off the worst of it. Meanwhile, her relationship with Malcolm, which is really more of a subplot of the story, is fraught with the sort of growing pains one would expect from two people who not only don't know each other well, but are in very different places in their lives, despite the obvious chemistry between them.

I like Malcolm a lot. I like his relationship with Sydney, too, and I literally laughed long and loud when he cooked (or tried to) paella for her. I'm just not on real firm footing about the potential longevity of that relationship. There is a lot about them together that works, but there's also a hell of a lot of things that could explode them at any given moment, and they don't actually seem to really have a place in each others world. It makes me leery of becoming too attached to him.

I'm already attached to the series. I do wish there'd been a bit more resolution of the plot thread left dangling in Don't Bite the Messenger, but that got only a passing nod a time or two in this story. It looks like it was being set up to be addressed in the next book, so hopefully we'll see resolution some day. I still believe that reading DBtM before this one is the way to go, even if you're like me and prefer to avoid prequel novellas. In this case, it was integral in setting up the world and the relationship between Sydney and Malcolm, and shouldn't be missed if you're going to read this book.

And really, if you like urban fantasy that's just a step outside the box with a heroine who can drive like a demon and the vampire who will brave electronic equipment for her, you should read this book. I just hope like hell we'll see a "second" book in the series soon. 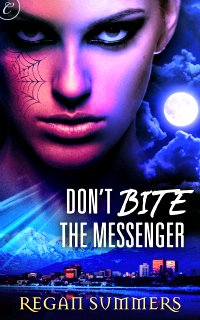 Return from Running in the Dark to Urban Fantasy

Return from Running in the Dark to One Good Book Home