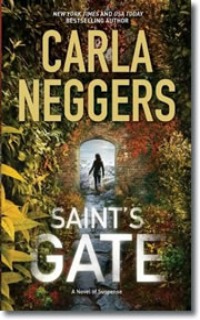 It's a cold, foggy Maine morning when FBI agent Emma Sharpe meets Sister Joan at the gate of the Sisters of the Joyful Heart convent. As familiar as the convent is to former nun Sharpe, the return is bittersweet. Sister Joan had called her because of their shared past, but it is her experience with art investigation that the sister needs.

Before she can question the sister or see the painting that sparked the nervous, almost fearful call, Sister Joan is murdered and the painting is stolen - both happening almost right in front of Emma as she waits by the gate for back-door admittance to the convent grounds.

FBI agent Colin Donovon specializes in deep undercover assignments and excels at being a self-sufficient pain in the neck for his superiors. After several exhausting years and a few deadly assignments, he's taking time to decompress with some camping and kayaking near his hometown in Maine. When his brother tracks him down to give him a missive from his friend Father Finian Bracken, asking he return to Heron Cove and look into the death of the nun, Colin reluctantly complies. His poking around puts him face-to-face with the prickly Emma Sharpe, and the game changes.

The two agents are soon embroiled in a widening mystery that stretches to a dead local artist, Viking mythology, the story of a lesser known saint, and the death of a troubled woman decades ago.

I have nothing but respect for Neggers ability to create and execute a well-developed mystery full of several potential suspects, conflicting personal agendas, and well rounded characters. Saint's Gate is a very thorough, complex mystery in that regard. Unfortunately, the focus of the mystery didn't hold my interest, the subsequent investigation was too low key to keep my attention, and a few trends with the manner of storytelling didn't suit me.

I liked Emma and Colin, but I struggled with their alleged burgeoning relationship. I wasn't convinced that they fit together and Negger's writes in a very internal manner that didn't translate the romantic plot threads to the page as well as I had hoped. That issue with internalization translated to other aspects of the plot, as well.

None of the characters were particularly emotive, so it was difficult to pin down how they were feeling about anything going on around them or happening to them. I have a hard time connecting to stories that are that low key. I find it difficult to care about events in the story if the characters don't seem to, and other than an issue with Emma's safety, there just didn't seem to be a lot of emotional involvement by anyone.

That's not to say there wasn't attention given to the characters, in fact, just the opposite. There is rather a large amount of dialogue and narration focus on the characters rather than the crime. Every character's personal motivations and history was hashed and rehashed in lieu of a murder investigation or an art crime.

That's when I started to notice a few annoying trends in the narrative. Too often I read one character or another could see that another was "holding back" some bit of information, and there were many mentions of characters seeing or knowing what is in another's thoughts or what their intentions were. I started to wonder why there needed to be any dialogue at all, or any investigation either, really, if everyone could tell what was in everyone else's mind or heart.

This is one of those books that I could tell would be appealing to many as I was reading it. Neggers writes with skill and obviously does the sort of research that makes her settings easy to visualize and her characters knowledgeable and realistic. But in part because of my personal reading preferences and in part because of how my mind works, it just didn't work for me.

Return to top of Saint's Gate