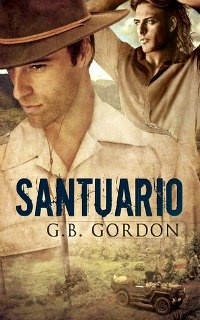 It's called Santuario. Rocked by poverty, ruled by powerful and corrupt familias, the southern island is populated by a race of people who landed on the planet two hundred years ago. Santuario became their home...though reservation may be a more accurate term.

The Skanians, themselves long settled on the planet, banished them to Santuario out of fear and distrust. Two hundred years later, that decision has bred discontent and shame among the Skanians and change is in the air. The political climate is heated, and while there are Skanians who want to keep the walls raised high between the two cultures, none are as adamant about maintaining the status quo as the brutal heads of the familias.

They are, without a doubt, adamant enough to kill to get their way, but they wouldn't leave a corpse around for the police to stumble across. They are too well versed at disposing of their enemies, especially as crimes like murder are reported to the Skanians. None of the familias want that.

No, the dead body that police tentiente Alex Rukow is called to investigate is a victim of something else entirely. All he knows is the entire case feels like one huge, potentially deadly nightmare. One that will be bringing the Skanians to Santuario and putting Alex directly in their path, as he's one of the few on the island who can speak their language.

When the Skanian investigator Bengt shows up, surly and huge and sick from the heat, Alex has every intention of washing his hands of the whole of the investigation and leaving it to the huge blond man. Then a second victim is discovered, and with it, a whole new range of far-reaching implications and deadly danger. Investigating what is fast becoming a complex and complicated case is definitely bad for his life expectancy, but the longer Alex and Bengt work together, the more Alex likes the man he's working with and the more determined he becomes to see this through to the end.

In ways, perhaps, that could bring more danger to both men than all the familias' fury combined.

I liked this book very much, but to be honest, it wasn't exactly love-at-first-sight. I had to work at it. In fact, there were several times in the first quarter of the book that I debated leaving it unfinished. The world was very sparsely defined and confusing, the murder investigation didn't do much for me from the beginning because I was missing so much of the context, and the overwhelming presence of Santuarian words (obviously heavy on the Spanish influence) in the narrative made it very difficult to fully grasp what I was reading and killed any chance of a smooth, flowing reading experience.

Not to mention it gave my embarrassingly shoddy high school-level Spanish comprehension a workout.

There really was only one reason I kept muddling through the tough spots until the story picked up for me, but it was a very good reason: Alex Rukow. He was an insular, solitary main character, that's for sure; an intriguing mix of jaded cynicism, hopeless ambivalence, tense apprehension, and wary doggedness. I just couldn't seem to stop reading about him. Intelligent, painfully resigned, surprisingly kind and generous...but so bruised by life and world-weary in a way that painted its own layer of complexity on his character, I found him utterly compelling.

For all that optimism left Alex behind a long, long time ago, there was a long-suffering sense of justice, fairness, and honesty about him that appealed. And kept appealing long enough for me to meet the other reason I didn't put the book down.

Bengt. He is light to Alex's dark, and I'm not talking about skin tone. From the moment Bengt stepped onto Santuario, he was the perfect compliment to the other man. His slightly superior attitude, the disdain he has for the heat and accommodations, his temper, and the frustration he feels with Alex's apparent apathy to life in general and the case in particular all combined to make him stand out like a vibrant, Viking-esque bastion of all things Alex doesn't have it in him to be.

There is an veritable cornucopia of problems between the two men from the very moment of their introduction. Their differences were profound and absolute, and watching them bridge the distance first to work together, then to forge the bonds that lead to the slowly-evolving relationship between them proved, for me, to be the most captivating and entertaining aspect of the entire book.

I was especially fascinated by the differences in their sexuality. The openly gay Bengt comes from a place where there is no stigma at all to being so, and Alex was raised in a place where it is considered such an unspeakable sin that he hadn't once even pondered the merest possibility that he was anything but a vaguely disinterested heterosexual. Which, really, spoke for itself in all sorts of deliciously subtle and foreshadowy ways from very early in the story.

The evolution of their characters and the slow, sometimes painful process of two such disparate personalities finding common ground and working together, then coming together, is where I felt the core power of the book really lies. I did enjoy seeing Santuario slowly expose its dark, corrupt, gritty underbelly as the investigation proceeded, though. Those elements gained greater and greater appeal as I gleaned enough information about the world the characters inhabit to better put things in perspective.

Romance lovers should be warned that a romance between Alex and Bengt is never the focus of the book and those plot threads are ancillary at best. Though there is sex in the book, it's by no means plentiful and what there is is mostly brushed over and written in carefully euphemistic ways. As a result, this book struck me more as an intriguing, complex journey of two very different men who come to realize they offer each other far more than either one of them knew they needed, as opposed to a more traditional-style romance novel.

Return from Santuario to LGBT - M/M