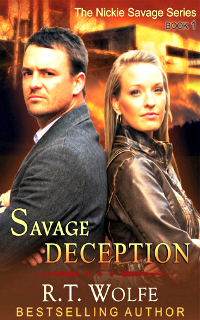 Savage. It's more than a name, it's a way of life.

Police Detective Nickie Savage had that brutal truth carved into her skin and burned into her mind when she was a child stolen from her home and forced to do things no child should ever have to do. But that was fifteen years ago, her past a bloody, jagged-edged crucible that forged her into the cop she is today.

She knows that's the reason the Feds have approached her to consult on a case surrounding a child prostitution ring. As suspicious as that makes her, she's quick to fly out to the crime scene in Vegas with Duncan Reed, famous artist, former military explosives expert, sometimes-hacker boyfriend by her side. Walking through the crime scene stirs echoes from her own tragedy, but that's not the worst of it.

With Duncan providing an assist, Nickie discovers evidence that suggests the perps behind the case are the same sick bastards who stole her from her own bed when she was only fourteen. With the implications of that connection rocking Nickie to the core and dark, painful secrets slowly rising to the surface after over a decade of suppression, it will take everything Nickie has just to stay sane.

And every trick in Duncan's well-stocked arsenal to keep the woman he loves alive.

Lately it seems I'm plagued with series debuts that don't read like series debuts. It's frustrating. At least in this case, there's a clear reason for it. Main characters Nickie and Duncan are featured in both Wolfe's Black Creek series and in Savage Echoes, a prequel novella for this series. I'm certain I would have had an easier time with this book had I read those, because there just wasn't enough exposition in this one to sufficiently introduce the characters or explain important story elements before the meat of the plot got going.

That was a problem for me, as the majority of the plot conflict revolves around Nickie's past, and there are a plethora of references to events and situations that I could only assume took place in one of those other two stories. As a result, I spent most of the first half of the book (and in places in the second half) feeling a general sense of disconnect and varying levels of confused.

I think my understanding was hampered by the third person limited point of view in which it's written. Though the character focus in the narrative shifts back and forth between Nickie and Duncan, which helped me get better acquainted with each of them, the lack of an omniscient voice didn't allow for a broader picture of their world and their past, and neither character deigned to reminisce on previously established information in a way that would have helped me find and keep my footing with the story.

That's a shame, too, because I think if I'd had that previously laid groundwork to build on, I could have loved this book.

I know I loved Duncan and I enjoyed Nickie most of the time - which is saying a lot for me, as I'm very tough on my fictional heroines. There were times when Nickie totally shut down and seemed more the victimized damsel than was comfortable for me, but most of the time she was a tough-as-nails, gritty chick I admired.

The best parts of the book for me were the scenes that featured both Duncan and Nickie. I absolutely adored them as a couple. Between Duncan's stalwart and unflagging devotion to Nickie and her fierce love for him, despite her myriad issues and their very different personalities, their scenes together stole the show for me. Before I was even sure I liked either character, I loved them together.

I also liked that their relationship, while obviously new, was already established. I don't read a lot of romance fiction in which that's the case, but I think the romantic suspense genre is a good fit for that particular relationship dynamic. Too, both Duncan and Nickie are very damaged characters, another point that appeals. Characters just seem more realistic to me when they have damage or flaws that impact their lives. We are all, to a one of us, walking wounded.

The external conflict in the plot was solid and meaty, even though some of the context was lost on me, but a few elements left me perplexed. I couldn't quite get a handle on Nickie's roll on the police force, as she seemed to spend more time investigating the connection between the evidence recovered in Vegas and her own childhood trauma than working any current day-to-day cases.

Don't get me wrong, I liked the story elements in the book and thought the investigative/police procedural end was nicely done. I just wasn't clear on how she could spend so much time on it over her open, active cases and more recent local crimes. I ended up feeling a little perplexed but mostly entertained by it all.

Hell, any attempt to end what was going on with the Bad Guys in this book is considered a solid win for me, story-wise.

Now that I've spent time with Nickie and Duncan and gotten a feel for their personal histories and their relationship, I want to read more, but to be completely honest, it wasn't always easy getting here. I would recommend this book only to readers familiar with the third book in Wolfe's Black Creek series or that prequel novella I mentioned. I certainly wish I had read those, because Savage Deception is listed as the first book in what has the potential to be a gangbusters romantic suspense series. It just doesn't read like it.

Dear Tracy,
I feel just terrible that I am just now getting to this review. I have major surgery scheduled soon (no exercise for 12 weeks! wha?!) and have been trying to get things in order. Your review is extremely helpful and thoughtful. Thank you! I have convinced my publisher to add a forward at the beginning to help readers know this is a splinter series. Your lovely review helped this come to fruition. You have a lovely blog and I truly appreciate your time in reading Savage Deception. I would gladly gift you the Black Creek Series. I've had several readers who have contacted me to let me know they started with Savage Deception, then went back and read the Black Creek Series. Duncan Reed is a child in book 1. Thank you, once again. -R.T. Wolfe

Hi, R.T.,
I'm pleased to hear the review was beneficial to you, and think a forward explaining the splinter series is a fantastic idea! I sincerely hope that gets your readers to start with Black Creek. Thank you so much for your kind words about my blog! I appreciate that more than I can say.
Thanks for introducing me to Nickie and Duncan! I really enjoyed spending some time with them!

Return from Savage Deception to One Good Book Home