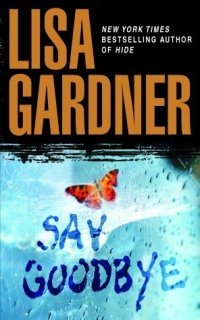 Every once in a while I read a book that affects me a little deeper, digs in a bit more, disturbs or touches me just a little differently than those I read the rest of the time. They're often the most difficult books to rate, because I can't qualify them as easily. Did I like? Love it? Those aren't the right words for something so deeply disturbing, or hauntingly chilling. Well, did I at least enjoy it? Again, enjoyment isn't even close. I'm left shattered, brittle...moved. Horrified and saddened by the damnable tragedy of it all yet deeply admiring of the talent it took to write.

Say Goodbye is one of those books.

In the mountains of Georgia there is beauty and brutality and, of course, there are spiders. A killer hunts his prey and prostitutes vanish. But so do little boys. Stolen to assuage a monstrous appetite. In those graceful, gruesome mountains innocence is irrevocably, irretrievably shattered.

FBI Special Agent Kimberly Quinn, now five months pregnant, gets drawn into a case that threatens her marriage, her unborn child, and the foundations of her sense of self. What starts out as a few potential missing prostitutes and an unsolved and seemingly random homicide of a former high school jock is all a part of an insideous web of such utter destruction that the scope is almost beyond comprehension. Just...look up.

I'm emotionally spent after finishing this book. Utterly wiped out. It's brilliantly written. Stylistically it's crafted just as intricately as any spider's web and is just as deceptively strong . Kimberly is a solid heroine, and Gardner has offered up her flaws, foibles, and fascination with pudding to create a complex but genuine woman struggling with the confusions and conflicts of looming parenthood. I didn't always like her. I sided with her husband on a few critical issues, but saw Kimberly's side as well, even if I didn't happen to agree. She was selfish at times, for all her intelligence and dedication, and some of her motives and actions were less than pure. No, I didn't always like her. But I respected the hell out of her, because I believed her. I believed in Gardner's rendition of a character who is very conscious of her own demons, and still manages to step on their toes now and then, even as they chase her.

Technically and stylistically, this book knocked it out of the park. The transitions were extremely effective and there were several long, hard looks at the descent into despicable evil. And it was so very scary that I was able to sympathize with a man-made monster. So very, very scary. The police procedural aspects of the story were perfect. Gardner creates characters, then lays out the clues, and spins it all into a taut, gripping, devastating story. I could practically feel the time ticking in the back of my head through every moment of the read, ticking and tocking away as my stomach clenched and rolled, desperate for some light at the end of a most desolate tunnel.

It must be said - must be said and re-said, actually, that this book is not for everyone. Readers need to be more than warned, there needs to be great big flashing lights and maybe a few of those disaster sirens going off for this one. Do not read this book if you are in any way sensitive to brutality against children, because there is plenty of that in this book.

Was it graphic...? It wasn't graphically described blow by blow, no...but it's plainly and coarsely referred to and mentioned several times in several horrifying ways throughout the book. The monster - and he is monstrous - is a pedophile who kidnaps, rapes, and kills little boys...among other things that are equally disgusting. The scope of his crimes, the level of his brutality, and the horror of the debasement of his victims are not spared in the telling of this book. Please do yourself a favor and try another one of Gardner's titles if you think you may not be able to handle that.

I don't consider myself a sensitive reader. I love books and shows that deal with psychopaths, watch and appreciate true crime documentaries, and am fascinated with aberrant psychology. I thought Silence of the Lambs (both the book and the movie) was brilliant and chilling, and Hannibal Lector will always look like Sir Anthony Hopkins in my mind. But Silence of the Lambs didn't affect me like this did. Maybe it was because the violence was mostly against children. Those are the most difficult victims to have to accept, and when coupled with the perversity of the antagonist, I was deeply disturbed.

Did I like it? Love it? No. In fact, it was disgusting and traumatic in parts. I appreciated the intelligence and style with which it was written. I thought the concept, plot, and characters were robust, fully realized, and freaky with atmosphere. I had a couple of minor issues with a subplot, and there was a plot twist that I saw coming a mile away, but they didn't affect my appreciation of the book. It was a polished, sophisticated novel with power and intensity.

And it was the most disturbing book I've read in a good long time.

Return to top of Say Goodbye