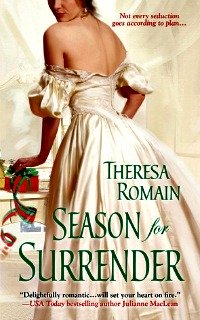 Disclosure:   An ARC of this book was provided to me by Zebra publisher Kensington Publishing via NetGalley.

Lord Xavier has never made a wager he hasn't won. This time, though, he's been goaded into a wager with stakes that could cause irreparable damage whether he wins or loses. He's been challenged to invite a proper young woman to his annual Christmas house party. Known for its debauchery and wicked revelry, it's definitely a scandalous place for a young miss. And not only does he have to get a lady to attend, she's got to stay through the duration.

Determined to best the bet and maintain his spotless record, Xavier has to think outside the box. If the lady must stay through his party, then he'd make the party more suitable for a lady. Simple, really.

Or it would have been, had the lady in question not been Louisa Oliver, a brainy little bluestocking who had weathered scandal before and survived. They had a past, in a manner of speaking, and getting her to come to his party and stay for the duration would take more maneuvering than simply making it respectable. For the first time in...well...ever, the only way to secure Lord Xavier's reputation and protect Louisa is to reach past that reputation to the man he is beneath.

When he does that, however, he is forced into a shocking realization: Louisa Oliver is more than a match for both the myth of Lord Xavier and the man, Alexander Edgware. And when it comes to Louisa, all bets are off.

There's something inherently appealing to me about a romantic hero who falls in love with his heroine when she sees into the man he is, not the face he shows the world. Dante-loving, vision-impaired Alex is just such a man. While his Lord Xavier persona is shallowly charming, a touch scandalous, and a bit of a condescending prat, the title has become a velvet-lined prison, so much so that he has almost become completely subsumed by it.

Underneath, though, Alex was a more uncertain and private gent who would rather read a good book than set the ton on its ear with the next bit of salacious gossip. Two sides to the same coin, the one overshadows the other for the sake of reputation and popularity in a world defined by both. He could have annoyed me as character, but I was too amused by the cultivated facial expressions to feel pique at his relentless need to validate his reputation.

Louisa was far more a simply genuine, straightforward character, and I loved her for it. She's my favorite sort of historical romance heroine: intelligent, sharp-tongued, and just a wee bit of a social misfit. I enjoyed her immensely, especially when she was popping pins in Xavier's ego. And she handled herself quite nicely when she needed to with others, as well.

Romain created a highly entertaining and vibrant backdrop for their romance. The two-week Christmas party provided a festive theme and a colorful array of secondary and ancillary characters to meet and enjoy. The plot could have been trite, with the bet setting up a cliched relationship conflict time bomb, but Romain stepped smartly around that pitfall. Louisa finds out about it early in the book so it's a non-issue in the romance, but still a motivating factor in both Alex's and Louisa's actions throughout the story. I thought it was nicely handled all around, actually, especially at the end when the money changes hands.

I did have a couple of issues with the book. Rightly or wrongly, I've gotten the impression from other historical romance that it was considered ruinous for an unmarried young woman of society to spend time alone with a man. Louisa's aunt accompanied her to Xavier's estate, but she and Xavier spent a lot of time alone together. I would have thought that would have been a big no-no. That concern - admittedly, unlearned as it is - niggled me throughout the story and stretched my willing suspension of disbelief a bit.

A larger issue, though, had more of an impact on my appreciation for the read. The dialogue. I don't know if it was a commitment to authenticity in historical speech patterns, or if the dialogue, especially between Xavier and Louisa, was written to be purposely obscure, but it drove me a little nuts. There was so much doublespeak, so much subtext and euphemism, that I had to really struggle sometimes to parse meaning in the conversations, especially between Xavier and Louisa. It significantly slowed my reading and kept me from being able to completely engage with the read.

I haven't read the first book in this series, but the story read fine as a stand-alone historical holiday romance. The main characters endeared themselves to me and their evolving relationship was engaging as the primary plot thread. I just wish I hadn't had to work quite so hard or so often to figure out what they were saying to each other. Even with that issue, though, I felt there were several original and fresh elements in story and character definition. Enough that I'd be interested in following this series as it progresses.

Return from Season for Surrender to Historical Romance

Return from Season for Surrender to One Good Book Home