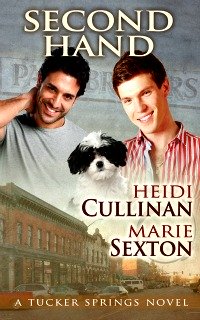 Disclosure:   An ARC of this book was provided to me by Riptide Publishing via NetGalley.
This rating, review, and all included thoughts and comments are my own.

Life for Paul Hannon hasn't exactly turned out like he thought it would when he first moved to Tucker Springs. First he flunked out of veterinarian school, then his girlfriend dumped him and moved out, and now he's stuck, nearly flat-broke, locked into a lease for the firetrap of a home he can barely afford to pay for with his job as a secretary for a vet clinic.

Not exactly a lot to smile about in all that, but mostly he just wants his ex-girlfriend Stacey back so much he aches. Her birthday is coming up, and Paul sees that as a perfect opportunity to try to get her to come back to him. He just needs the perfect present.

Jaded loner El Rozal is minding his business, literally, when the cute guy with the reddish hair and quirky smile walks into the pawn shop he owns looking for a gift for his ex-girlfriend. It doesn't take fifteen minutes for El to realize how adorably cute but truly clueless and heartbroken Paul is.

El is hardly a perfect angel, though, and when the opportunity to spend time with Paul drops in his lap...for all its less-than-ethical reasons...he shamelessly takes it. And the more time he spends with Paul, the more El crushes on the man. So much, in fact, that he can't help but wish Paul isn't as straight as he thinks he is.

Trying to find out if Paul could ever be receptive to him romantically in a risk-free, subtle way, though, is a far more difficult task than El could have ever imagined. For all that Paul is sweet, funny, kind, and adorable, he's also absolutely and completely oblivious. To just about everything.

Cute and quirky, with one very likable main character and one eminently lovable main character, Paul and El's story made me smile. Cullinan and Sexton kept the plot conflicts from delving into angst-heavy complexity. Problems were mostly taken at face-value, quick to flair up and just as quick to be resolved. I enjoy light, uncomplicated romance now and then so that worked wonderfully for me here. Sometimes, a girl's just gotta have some brain candy.

I loved El. He made the book for me. The things he did to keep Paul coming back to his shop, the way he maneuvered him into spending time with him, both very sneaky and very endearing. He was just so good to Paul, so patient, and when he gets his chance with him, so perfectly in...over his head. I spent most of the tale either amused and/or delighted with him.

And I can't remember any laundry night I've ever had even remotely as entertaining.

El's issues with his sister and mother added a layer or two of depth to both his character and the story, and from the moment he took the dog I was an absolute sucker for them both. I do think that some of the souces of conflict, notably his mother's hoarding, were a bit glossed over, but it did add a twist to his backstory and current family conflicts.

Paul's obliviousness about everything from his sexuality to his job prospects was endearing for most of the book, but there were a few times he seemed more dense than oblivious. He was just a little too gullible for me on more than one occasion. When combined with his self esteem issues, his personality quirks started to wear on me in the latter half of the book, and I couldn't quite embrace his character as thoroughly as I did El's.

I was a little confused by their relationship conflict in the climax of the book. After El's seemingly endless patience and understanding nature when it came to Paul, that struck me as feeling a little out contrived, coming of nowhere. Like everything else, though, it didn't languish unresolved for long. I prefer a bit more work put into the resolutions leading to the end of a book. This one seemed as abrupt as the initial conflict. I have to say, though, I wouldn't have missed Paul's mother explaining her understanding of her son's life for anything. I loved that.

Though Paul and El's romance falls on the lighter and shorter side of a full sized novel, I thoroughly enjoyed their story and my first visit to Tucker Springs. It was just the feel-good, cute, sexy read I needed for a little light entertainment.

Return from Second Hand to LGBT-M/M

Return from Second Hand to One Good Book Home