Secret Life of a Vampire

A Sexier Secret Would've Been Nice 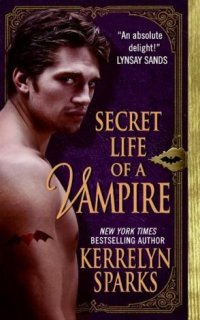 The illegitimate son of Cassonova and ever-so-burdened by his father's legacy, vampire Jack de Venezia is hosting a bachelor party for the soon-to-be-wed Ian and Toni (All I Want for Christmas Is a Vampire) at an exclusive hotel. As it turns out, vamps can't hold their blood fusion drinks and the party gets raucous enough that hotel security calls the cops. Unfortunately for Jack one of the cops that arrives on scene is Lara Boucher, former beauty queen, former car crash survivor, and totally immune to his mind mojo. She's tenacious, relentless, inquisitive, and the most gorgeous female Jack's ever seen, but he's lost loves to the truth of his existence before and he's not willing to risk trusting another, not even the woman who quickly steals his heart.

When Lara, trying so hard to be a detective, stumbles across the case of disappearing college girls and all the witnesses have that same sort of vagueness that she'd seen Jack force onto others, she suspects the handsome...if bizarrely powerful...man is up to the sort of no good that ends in blood and death. Or he's an alien. Possibly a superhero, though. She's not entirely sure. He's either the sexiest good guy she's ever seen...or the sexiest evil guy she's ever met. Can either one of them ever learn that to love is to trust and not trusting...could end in death?

I've read all but one of Sparks' Love at Stake series and have to admit, this one wasn't my favorite. I enjoy the series and think they're usually fun, romantic reads without a whole lot of darkness in it, despite the vampires. This one fell short for me.

I had a hard time with Lara's character in this one. I liked her in the beginning, but by the time she finds out what Jack's deal is, her ideas and thoughts about it had become preposterous and her reaction really disappointing. For a woman trying to be a police detective, she didn't strike me as very mature or intelligent. I also didn't find Jack to be as appealing as some of the other lead males in this series. I didn't have any real complaints about his character, but there just wasn't anything all that compelling about him. And all the 'bellissima's and 'cara mia's and 'merde's got old sooner than halfway through the book. It was like the man couldn't start a single sentence without an Italian word at the head of it. That was a little too Gomez Adams for my tastes.

Despite my issues with them as individuals, though, or those minor annoyances, I could have forgiven most, if not all of it had the pair had some good chemistry between them, but while it was okay, it lacked a lot of the passion and sense of fun, along with the fiery heat that others in the series shared. That aspect was particularly disappointing. More so because it is that chemistry and the combination of sizzle and endearing humor between the lead characters that has kept me interested in this series.

The series has never been a heavy hitter in regards to plot, overall it's more romance brain candy than complex plot-driven romance. That's not a complaint - I love a good light romantic read...with fangs. In this one though, the plot and even the dialogue seemed a bit too unsophisticated and unrealistic (relative to the genre) to really impress me. Again, nothing horrible...except maybe that whole Greek God thing; that didn't work for me at all. But the relationship in Secret Life of a Vampire wasn't as romantic or sexy as I'd hoped, the plot didn't progress as well and wasn't as well developed as I'd hoped, and the characters...well...sorry, but they weren't as appealing as I'd hoped. I wasn't bored while reading it, and I surely didn't dislike it, but for me, it was just okay.

Return from Secret Life of a Vampire to Paranormal Romance Genre