Secrets of the Demon 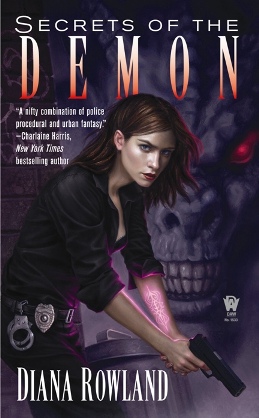 Beaulac, Louisiana homicide detective Kara Gillian is in New Orleans, working a case with the multi-jurisdictional task force she's recently joined with FBI Special Agents Ryan Kristoff and Zachary Garner. The task force deals with white collar and "financial crimes"...also known as crimes having a supernatural or paranormal element. The lead singer of the Goth rock band Ether Madhouse has been receiving threats that a demon is intent on eating her soul during her last concert on the tour, so Kara, Ryan, and Zach have joined forces with NOPD detective Marco Knight to stake out the concert, Kara on high alert for any trickles of arcane power.

When the singer is snatched suddenly by something that is definitely not a demon...nor anything else Kara had ever experienced before...the potential publicity stunt takes a dark turn, and any pleasure at rescuing the lead singer is quickly squashed when bodies start turning up surrounded by fields of arcane dissonance that match the one she felt during the singer's abduction, but doesn't match any sort of power with which Kara is familiar. And she can't stop what she doesn't understand.

As the body count rises and the search for answers gets overshadowed by a growing number of tough questions, Kara's job gets infinitely more dangerous. A new wave of power is rising and this time, the thick, oily sense of evil intent is directed at her, and it's the sort of power she's not strong enough to withstand.

I love this series! Kara Gillian is one of my favorite ongoing-series heroines in the genre right now for the very fact that she's so wonderfully normal in all aspects but one: she can summon demons from the demon realm, an alternate universe that brushes against ours. These are not hell and brimstone monsters, either, but different species with various levels of intellect and power that are bound by a strong code of honor. I love the mythos and world building Rowland has created for this series, and I adore the mix of solid police procedural and urban fantasy roller coaster.

But Kara is definitely the driving force of the woman-love I feel for this series. I love that she's got body image issues, isn't a fan of working out (her approaching PT test is enough to give her hives when she thinks about it), and thinks a healthy breakfast is a couple of chocolate donuts and a mug of brew. I think it's fantastic that she's nearly friendless (though that's improving as the series goes along) and hasn't had a relationship with a man last for more than a handful of months...either of the two times she's had a relationship at all. Okay, true, maybe that's not fantastic for her, but for me as a reader, I find her ultimately sympathetic and ever so easy to relate to. She's a little neurotic, a bit insecure - and acknowledges it, and though she's a tenacious bloodhound and a hell of a detective when it comes to solving a case, and would give up her life protecting people she cares about, she's far from a know-it-all and has huge gaps in her understanding of even the forces she is able to manipulate and the magic she can wield. She's an Everywoman of the highest and most well-defined order and I love reading about her.

Diana Rowland deserves a lot of woman-love from me, too. Her ability to blend the mundane and the arcane is stellar, and her gift for dropping taunting little teasers in the overall series plot arc as she slowly but thoroughly embellishes and defines that arc is maddeningly brilliant. She answers some questions in Secrets of the Demon that have been plaguing me since the first book, Mark of the Demon, but still manages to drop more questions into the mix that are just as dastardly. Damn her!

Yet for all that, I didn't enjoy this book quite as much as the previous two for a few reasons. There were some aspects of the police procedural plotline that I had some trouble with in this book - and that's a first for me with the series. I just didn't find the idea of some sort of magical construct picking off members of a goth band all that compelling and the time Kara spent following the trail without Ryan and Zach around dragged for me because of it. Well, it did right up until Kara suddenly came under direct fire from an unknown arcane force...the book picked up for me from there. And then rocketed to a very satisfying and plot-twisty conclusion. Still.

I also had, for the first time, a few issues with Kara herself. The just friends/more than friends angst between her and Ryan really got on my nerves in this book, and there was a lot of it - or it felt that way, anyway. It is the one issue that really has the ability to turn Kara into a petulant sixth grader who lacks appeal. Her internal monologue about Ryan and their relationship and her behavior during key moments smacks of a level of immaturity and insecurity that's hard to read by the fifth, sixth, twelfth, and twentieth time I come across it. And though Kara gets points for acknowledging that she's being really immature and insecure, it doesn't alter the fact that I don't like reading about it every time Ryan is a part of a scene. That and a too-healthy dose of hypocrisy really turned me off when a question about a Ryan/Jill hookup popped up. Considering Kara's ongoing relationship with Rhyzkahl I had a big problem with that. I loathe hypocrisy. And I'm none too keen on never-ending love triangles either (um...not that Rhyzkahl is a love match exactly, but...well...you know what I mean). For me, those Kara issues were the most serious of the detractors in this book.

My only other issue wasn't really an issue so much as a curiosity. Kara's language in this book, most notably when she's conversing with her best friend Jill, seemed far more graphic than I remember her being in the first two books. I haven't gone back to check to see if I'm misremembering something, so it's entirely possible I'm off base here, or that the language was an indication of their deepening relationship, but I found it jarring at times. I don't have a problem with coarse language. I use coarse language all the time (don't tell my mother that, though - apparently no age is old enough for the "F" word with that woman). I just found it jarring in relation to what I've come to know about Kara in the previous books.

I gotta say, though, regardless of the issues I had, the ending of this book rocks. There were plot twists I wasn't expecting and answers to questions that had me reeling, and the implication of those answers are mind boggling. The addition of some awesome secondary characters have a ton of potential for juicy development and I'm thrilled to get a chance to see more of them. And as usual, I loved every aspect of every scene and every mention of Rhyzkahl. He's just a whole lotta yum wrapped in an enigmatic, morally questionable, and pleasantly terrifying package.

Secrets of the Demon proved to me that the world Rowland has created and plot she has in mind for it are still expanding in utterly delicious ways. I can't wait to continue this series (their may be frothing at the mouth...just ignore that)!

Return from Secrets of the Demon to Urban Fantasy Genre

Return from Secrets of the Demon to OGBDA Book Reviews Home