Seven Nights in a Rogue's Bed

Beauty and the Beastly 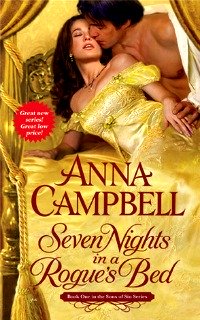 Disclosure:   An ARC of this book was provided to me by Forever publisher Grand Central Publishing via NetGalley.
This rating, review, and all included thoughts and comments are my own.

Sidonie Forsythe entered the dour Castle Craven with fear gnawing on her stomach and determination stiffening her spine. She knew the reputation of the scarred lord of the manor but the debt to a sister who had been a mother to her forced her hand. With Roberta's life on the line, she resigned to give herself to the nefarious Jonas Merrick in her stead.

Jonas had carefully and with great intent spun the web that the beautiful wife of his vile cousin had all but thrown herself into. With victory assured and every marker in his possession lined up, he had every intention of spending seven nights using Roberta to degrade and humiliate the cousin who had stolen so much from him. Except it wasn't the pretty wife that entered his parlor, but the wife's sister. An innocent in every way.

Perhaps it should bother him to continue with his plan, trading one sister for the other, and in so doing, ruin Sidonie's future unequivocally. It didn't. Jonas just wasn't that sort of man. He couldn't afford to be, given his appearance and all it represented.

It was certainly, and cynically, no surprise that the fair Miss Forsythe shivered and shuddered in his presence...though she didn't seem to be overly concerned with his scars. And that was only the first in a series of unexpected aspects of the young woman's personality. Not that it would garner her any mercy.

But maybe...just maybe...a different sort of game is called for. A different focus for this different woman. One who is, Jonas warily acknowledges, far more...everything...than he'd anticipated.

When I read the blurb for this book, I was drawn to the similarities in theme to Beauty and the Beast. Young woman goes to crumbling castle to beard the scarred, wretched beast in his den. She is the only one who can see behind his beastly facade to the man beneath, and her love changes him from monster into prince. They live Happily Ever After. Fade to black.

And this book would have been, too, if it hadn't been for one or two niggling details that broadened that simple concept into the plot of this book. Details like Jonas, a character that is damaged and complex and on the surface everything I love most in a hero...turning out to be a ruthless bastard who took shameless advantage of a woman's addiction to force her into his clutches so he could cuckolded her husband to punish him for his offenses against Jonas. With not the first thought for the welfare or consequences the woman would suffer after he'd discarded her at the end of that week.

And when that married woman's completely innocent and virginal sister shows up instead, he still refuses to relent. Instead he adapts his plans and holds the gambling debt of her sister over the innocent's head so that she is forced to service him in her sister's stead.

Yeah, Disney didn't exactly cover that one with singing teapots and dancing brooms.

Of course, there is attraction between the beauty and the beast, and the book is written as a slow seduction of the one as we get glimpses into the pain and damage of the other, but I found myself so struggling with the basic measure of a man who would consider - even if he didn't actually do it - using a woman as shamelessly as he intended to use Roberta. That trod a little too close to my line of irredeemable for me to fully embrace Jonas as the romantic hero in this tale.

And believe me, I was absolutely no fonder of the selfishness of Sidonie's sister in allowing her to face Jonas on her own in her stead, regardless of the abusive husband. For the first several chapters of the book, the only character I could even remotely tolerate was Sidonie herself. But that little bit didn't last too terribly long either, what with the secret Sidonie held back from Jonas even knowing exactly the price he'd paid for it.

Not exactly the stuff of sweeping romantic fantasies.

Campbell does have a descriptive, emotionally significant writing style that appealed to me, though. The nuances of the main characters' emotions, damages, flaws, and insecurities were particularly well crafted. That appeal was able to smooth over some of my initial displeasure as I read further into the book. I was even able to eventually feel a genuine bit of the magic between Sidonie and her beast as their romance progressed. I just tried to forget the grim manipulations that put the players into the positions they were in. That helped.

The sex scenes were deliciously hot and went hand-in-hand with the angsty emotional consequences of Jonas' disfigurement, but they also overwhelmed the story a little. I would have traded one or two, or been content with shorter scenes in lieu of more complex character evolution and depth of plot.

A better balance in the plot would have been nice, as well. The main characters spent so much of the book in Devon that the plot threads that directly dealt with or spun from Jonas' cousin late in the book seemed cramped and abrupt, and there was one huge twist that seemed to spring up out of absolutely nowhere, despite all the care taken against it. And as much as I did appreciate the emotional quagmire that Jonas was forced to deal with on a daily basis, understanding the trust issues that could spawn, the relationship conflict and subsequent climax still seemed starkly abrupt and a bit out of character to me.

For all that, this wasn't one of my favorite historical romances. I think Campbell is more than capable of a thoroughly entertaining read full of flawed and damaged characters and sweeping romance. These characters and their story just didn't reach that level for me. That said, Campbell's authorial voice is solid and some of the secondary and ancillary characters introduced in this book did spark my interest to a degree that I would continue with the series if they're to be featured.

Return from Seven Nights in a Rogue's Bed to Historical Romance