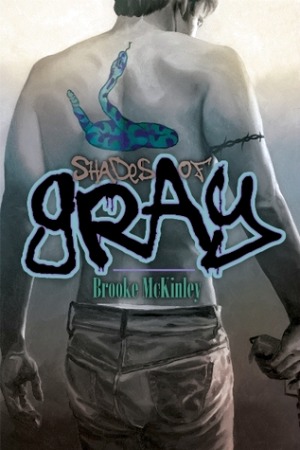 The FBI isn't known for being an agency of free thinkers and sympathetic humanitarians. They are the top dogs in the overcrowded junkyard that is this nation's quagmire of crime and punishment. They serve with prejudice and without compassion against those who break the law. The belief is simple: either you are law-abiding, and therefore have no cause to worry about their existence, or you are not...and worry is the least of your problems.

For years, Agent Miller Sutton had been firmly entrenched in that black-and-white world as the prototypical Feeb. It was only recently that the whispers of doubt in his mind had grown to murmurs, that conscience twinged when once it had been quietly quiescent. Now, though he fought against seeing it and questioned its validity, there was a blur at the edges of his black and white world, and in that blur, a clawing, crawling, ever-widening strip of gray.

In that strip is Danny Butler.

There is just something about the insouciant man that affects Miller in ways that are as uncomfortable and unwanted as they are inescapable. He had been watching him for six months, knew his habits inside and out, and was all set to flip him against his drug cartel boss, Hinestroza. But Miller still had questions about Danny, questions that were impossible to ask without opening himself up to a far too dangerous internal debate over why he needed those questions answered.

His job, which he clung to fiercely, was to flip Danny and use him. Promise him safety, promise him protection, promise him a life, but force him to risk everything and go against one of the most coldly vicious crime bosses in the world. This time, though, some spark in Danny that makes him who he is turns the lies and promises to hot ash on Miller's tongue. And that's why this time, when the inevitable happens and Hinestroza catches wind of Danny's betrayal, Miller steps up and whisks him away, setting him up in a safe house and guarding the man himself until Hinestroza can be caught.

Danny is a thug...a mid-level drug runner...a criminal...gay...and he's the most compelling man Miller has ever met. Danny's life choices may be suspect, but the inherent honesty in which he lives in his skin - embracing all those shades of gray which scare Miller so very badly - is a seductive draw that the shaky Miller can't seem to escape. Even if he wanted to.

Miller's job is to keep Danny alive. He had no idea that it was Danny who would offer Miller the first opportunity he'd ever had to truly live. One thing is certain, protective custody has never been so dangerous...for either of them.

Every once in a while - far less frequently than I would like - a book sets itself apart and speaks to me a little more intently than others, affects me a bit more deeply, stays with me a little longer, echoes life's truisms a little more keenly. In those instances, the combination of quality storytelling, story, character, and meaning all come together to elevate a book to the highest level of my esteem. Shades of Gray is one of those books.

McKinley's powerfully written prose struck a brilliant balance of stark lyricism and gritty realism and the many-tentacled monster that was the plotline served up enough action and suspense to double as a summer blockbuster. At the core, though, were two men at a painful and dangerous crossroads, each needing something from the other, each loathe to depend on the other for those needs. Their search and eventual success in finding mutual ground was littered with the sort of gripping, character-driven drama and emotional detritus that leaves a long and lasting impression.

Miller's struggles with his identity and his sexuality were painful and poignant, and Danny's torment over his past and the grim acceptance of his present were heartrending and bitterly honest. Together these two characters were a powerhouse of personality and conflicted, conflicting desires. Their character evolution through the events of the story and the development of their relationship as those events start to spiral into deeper and more dangerous waters is some of the most darkly entertaining fiction I've read recently.

I credit McKinley for the adept manner in which she kept the lives of Miller and Danny real while carefully navigating the pitfalls of hopelessness, despair, loss, anger, and a myriad of other ghosts that haunted both their souls. There was by no means a calm and easy trip to a pat HEA for these characters. It was painful, it demanded its sacrifices, and it was certainly not without a high cost for both of them.

I'll remember it as my favorite novel in the genre that I've read to date.

In Shades of Gray I found a rare treasure in gay romance, exceptional quality fiction that tells a phenomenal story. One that doesn't simply seek to titillate with the sex, but that truly captivates with the emotional journey. Gritty, poignant, starkly real, and at times brutal, it was a harrowing but ultimately triumphant odyssey that was a joy to read. I loved it.

As always, wonderful review. I've never read a M/M romance before simply because there hasn't been one that has jumped out and caught my attention. But your review has me sold.

Thanks, Cat! I meant to leave a comment on your blog the other day when I was poking around, but I lost my connection and forgot to go back. It's looking great! I LOVE how vibrant the graphics and flash are.
As to Shades of Gray - from what I know of your reading preferences, I think this would be an excellent place to start if you're dipping your toe into the M/M romance waters. The quality of the writing was very high and the main characters definitely had their dark sides.
You know how finicky I am with my five star and/or favorite ratings.
I can't guarantee you'll love it as much as I did (too much pressure in doing that!!), but I don't think you'd be at all disappointed.

This is one of my top 10 books. The characters were so engaging... I think about them still. Their story was heart wrenching. I was so rooting for them, and there was a point in the book I thought it wouldn't get a happy ending. Brooke McKinley is really a gifted individual. She sucked me into this story big time. I read it in one night, but I think of it often.

What made this book so great was there were no throw away characters or scenes. Everyone's role was important, every scene needed for the next. The scenes where Danny and Miller got to really share themselves and where Miller admitted how much he needed Danny were perfect.

I can't recommend this book to enough people.

You said it perfectly, Mariana - there are NO throw-away scenes or characters. Everything has a purpose and everything moves the characters along their path to personal growth. I, too, got nervous about the potential that they WOULDN'T have a happy ending...and honestly, the way it ended was just right for the characters and their development. This was a solid, solid read that I appreciated on many different levels.

Return from Shades of Gray to LGBT-M/M

Return from Shades of Gray to One Good Book Home