A Step Down in the Series 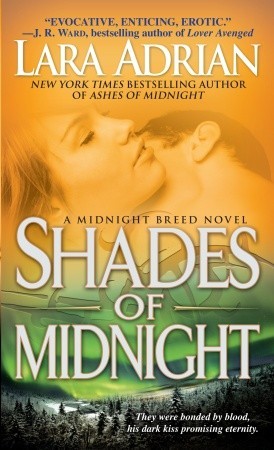 I'm well aware that this review is going to be a minority opinion, but as much as I've enjoyed Adrian's Midnight Breed series, this particular book and the lead characters in it just didn't excite me as much as the previous novels.

Alexandra Macguire is an Alaskan bush pilot that flies into remote areas of the frozen north to deliver goods and medicine. On one such flight, she stops at the home of friends only to find an entire family slaughtered in a brutal and bloody fashion. A fashion that shakes her down to her soul and reminds her all too clearly of the loss of her mother and brother, and of a flight of another kind altogether - the cross-country escape from a madness a child's mind could never comprehend.

As a Breed warrior and recent addition to the ranks of the Order, Kade is sent back to his family's stomping grounds on a mission to find out what's behind the mindless slaughter, but he's ridden by the fear that his twin is responsible for the deaths of innocents, and guilt from decisions in his past, decisions to flee Alaska and his family, make him ultimately culpable. What Kade finds first is Alex, and while she stirs a fire in his blood that would keep him warm on the coldest of the Alaskan nights, what they stumble across together could destroy everything - and everyone - in the end.

I was truly looking forward to delving into this story. I liked the setting, and I really enjoyed...in a disturbed but impressed way...the beginning, but then for me, Shades of Midnight sort of sputtered out. Adrian is extremely talented and she's given us six books with vibrant characters, tense plots, and a growing and deepening arc of good vs. evil - with fangs and guns. This one didn't quite match those in either plot or character, and one of the most disappointing aspects of this one is that by the end I didn't care very much for Kade or Alex, and didn't get any sense of true lasting emotion between them. Alex started out strong and seemingly independent (she's a bush pilot in the Alaskan wilderness!), but she seemed to backslide when faced with horrifying memories of her past and just never seemed to regain that strength to stand on her own. Kade was very disappointing. I'm sorry, I don't know if it was the fact that he ran from his family instead of dealing with his brother a year ago, or that he spent most of the book beating himself up about it that really turned me off. Hell, maybe it was the fact that I couldn't help but sympathize with the humans who lost loved ones and family members because Kade kept his mouth shut and flew the coop instead of doing what he should have done. What he went to Boston to help the order do. Kill rogues. Whatever it was, I didn't find him to a very worthy Breed.

And the story had some major flaws for me as well. Most notably, by book seven of a series, I would have expected the overall arc, the theme that holds all the books together, to be tightening and getting more tautly defined as the battle between good and evil creeps closer and closer to a head, but in this one, the story thread of Dracos was...dare I say anemic?...and the scenes with the ancient were at times tense and interesting, and at times a confused mess that didn't make much sense. I did like seeing the Breed males I've come to know and care for, but they ended up being too much of a non-factor to leave much of an impact. There were quite a few other issues I had with the book, as well.

By the end, I was left with a general feeling of ambivalence. Maybe a little disappointment. I didn't dislike the book, by any means - regardless of my complaints, Adrian tells a good story. It just wasn't the story I was expecting, and I didn't like it as much as I've liked all the others. It's not a bad story - not at all. It was just...sort of..."Meh."

Return from Shades of Midnight to Paranormal Romance Genre

Return from Shades of Midnight to OGBDA Book Reviews Home