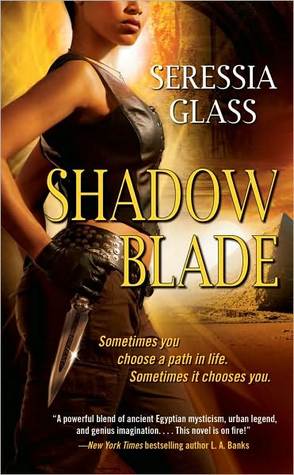 The first thing I did when I finished reading Shadow Blade was make sure that my memory was correct, and that it was the beginning of a series and not a standalone novel. Not because I didn't like how it ended, but because I was so impressed with Seressia Glass' fully developed and vibrant world rich with ancient Egyptian and Africa history, not to mention the three dimensional characters, zippy narrative, and intriguing plot.

I'm thrilled to say that Shadow Blade hit all my happy spots. All of them. I loved it.

I'm not going to summarize the plot here, as it's been done sufficiently in the product description and can be accessed through several links in this review (and frankly, I'm not totally sure I could do the job justice myself). I need to express, though, what I most enjoyed about it. I loved the setting, Atlanta. I was really impressed with the flawless blend of history and mythology that never - for me - bogged down the story or stuttered the plot. I found the lead character, Kira Solomon, to be a stunning blend of intelligence, confidence, and aptitude with her work (both jobs), devotional commitment to her calling, and refreshing innocence and sense of yearning with everything else. Some reviews have criticized that dichotomy, but for me, it made perfect sense. The poor girl has been able to touch exactly no one in her entire life without it ending in coma or death or pain. Twenty-six years of complete physical solitude unless she's killing. The wounds on a person's psyche under those conditions are unimaginable, horrifying, and entirely well represented by Kira's responses to events in Shadow Blade. I believed it utterly and I sympathized completely with her, as my admiration for her as written grew and grew. And kudos to Glass for the masterful development of Kira through the arc of the story. And for me personally, the development of the relationship between Kira and Khefer not only worked and was realistic and believable, but it was laden with both tenderness, hope, and at one point, one of the most sizzling kisses I've read in any novel this year. Exceptionally well done, I thought.

Also tremendously well done - and refreshing for the very sense it made - was Khefer's reaction to Kira's inquiries and curiosity about his four thousand years on the planet. Brilliant scene and truly...finally addressed one of the most niggling issues I've always had when books include long-lived races or individuals. I've gotten so used to just accepting that a thousand year old vampire has perfect recollection of his time as a human because that's how it almost always seems to be written. But it doesn't make sense if you think about it. A four thousand year old Nubian warrior who didn't even need to learn to read or write prior to the Roman empire?? Excellent! I can't remember what I was doing fifteen years ago on this day. Why should Khefer remember what he was doing fifteen hundred years ago? Brilliant! And I absolutely loved that line about history happening when you're just living your life. There were some real truism gems in that whole scene.

And while I was being impressed by the deft storytelling, the world building, and the character development, I also appreciated that the book included humor. Nansee (Anansi is my favorite secondary character in a book in ages) was a perfect foil in that regard, but even Kira had a sardonic sense of humor that tickled me.

All together, Shadow Blade is definitely standing out as one of the most thoroughly satisfying - on every level, from technical to emotional - books I've had the pleasure to read this year. I had one...not complaint, really, more like an issue. I felt the final conflict with the Avatar was never fully realized. It seemed a bit short and underdeveloped for all the build up. That one issue is not enough to dim my deep appreciation and admiration for Shadow Blade as a whole, however. If you're interested in a genuinely unique and richly pleasurable urban fantasy series, I'd highly recommend you give Seressia Glass' Shadow Blade a try.