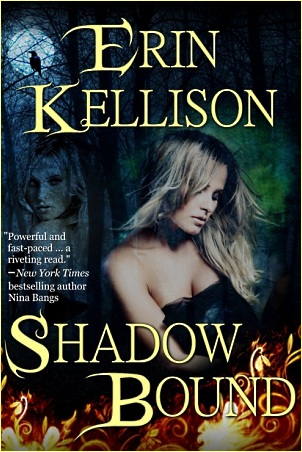 Twenty-six years ago, the fae known as Death stepped through the veil between Shadow and loved a woman incandescent of soul, breaking the laws of Shadow to do so and setting into motion events with far reaching repercussion. Chaos has spread like a stain across the country ever since, spawning soul-eating and immortal wraiths with voracious appetites. That's not all that was spawned that night, however.

At twenty-six, Dr. Talia O'Brien has always known she's different, not quite normal, otherworldly, and has yearned for nothing more than peace. Brilliant she may be but fear of her differences keep her insulated from humanity, until a knock on the door and the death of her roommate stripped the blinders from her eyes and forced her to realize there were creatures out there that were hunting for her, and they were even less normal than she was.

Adam Thorne is intensely motivated to find out as much as he can about the wraiths, desperate to discover the way to kill them. Six years ago he watched his older brother Jacob attack and eat his mother, then his father, and only luck prevented Jacob from consuming him too. Since then he's kept the creature that used to be his brother contained in the bowels of the Segue research facility as Adam does everything in his power to find a way to kill him. With only a word...a name - Shadowman - as a clue to stopping the wraiths in general and his brother in particular, he stumbles across a doctoral dissertation on near death experience that gives him the first - the only - other mention of Shadowman he's ever seen. A dissertation by Dr. Talia O' Brien.

Talia's on the run from horrifying monsters, physically and mentally spent when Adam finds her and brings her back to Segue, saving her life. She doesn't trust him. She's not sure what's going on. She doesn't even know the full extent of her powers or why she has them. All she knows is that Adam is a beacon of hope and his cause, while motivated by an unhealthy, if understandable, obsession, may be the only way for Talia to survive what she realizes instinctively is a coming war.

With a breakneck pace and slick, tight plot that is deliciously original and unique, Kellison has jettisoned herself into the ranks of the upper echelon of paranormal romance series. The narrative is smooth, balanced and lyrical of prose and at times and gritty and coarse, drawing the reader along and perfectly setting the tone for each scene, adding an intangible layer of excellence to this sophisticated, polished story.

Talia and Adam are complex characters, flawed and complicated, and often at cross purposes in their motivations, but their interactions are pure, rich, meaty entertainment and I absolutely love the disciplined and deftly crafted development of their characters. Their evolution as individuals and together as a pair felt organic to the story, each step carefully executed, imbuing each of them with depth and personality that makes them shine.

I loved it. I loved everything about it. I loved the plot, which was fresh and well told. I loved the narrative, with the smooth writing style that added the invaluable tone to the plot, enhancing the reading experience. I loved the characters, heroes and villains and everything in between, which supplied the story with such fantastic emotion and a true sense of threat and sacrifice. And romance.

I loved it. Unqualified. One of my favorite reads all year. Read it now, and if you're a Kindle owner or eBook reader, download the second in the series, Shadow Fall, while it's being offered as a free read.