A Fun Read With Two Characters To Cheer For 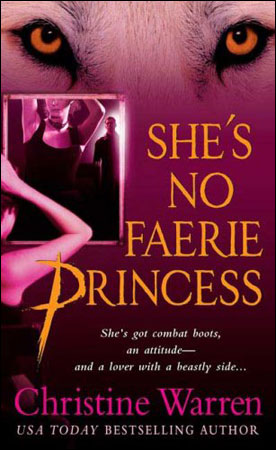 Christine Warren's second book in The Others series is a better balanced and fleshed out novel than Wolf at the Door (The Others, Book 1), with a stronger narrative and creative world building that enhances the paranormal romance novel's base plot sufficiently enough to lift the book out of the doldrums of been-there-read-that and give it a breath of freshness, even though the world of the series isn't the most original (creatures of myth and legend taking steps to come out to the general public about the truth of their existence).

Fiona is determined to buck her Aunt Mab's wishes...and Fae law...and get the vacation from court life she so desperately needs. She crosses into the human world and comes face-to-cloven hoof with a demon intent on feasting on her heart. Tobias is beta wolf to the silverback pack and pulling double and triple shifts protecting the humans during the sensitive time of negotiations between Other and humans for recognition and protection under the law. When Fiona's scream of terror sends him hurtling into her life, neither one of them quite regain their equilibrium and the world as they know it becomes more and more dangerous and the delicate negotiations are threatened.

Quickly paced with some depth in plot, a strong and independent female protagonist and a sexy alpha male protagonist, She's No Faerie Princess is fun and funny, sexy and sentimental, with surprising depth in emotion in more than one instance. It was also nice to see familiar faces from the first book in the series, and new faces have some intriguing potential. A very good read, and I'm looking forward to the third book in the series, The Demon You Know.

Return from She's No Faerie Princess to Paranormal Romance Genre