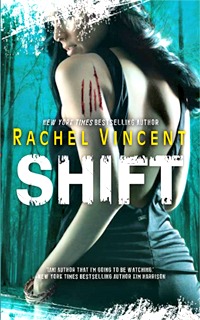 Well, I finished Shift, and even after sleeping on it and debating this review, I'm left with this thought: Thank hell there's only one book left in the series.

I've been with the series since the beginning and have felt all the way through that the books are entertaining, but the main character is a chore. In this book, I actively detested her. And unfortunately there wasn't any overall series arc development in Shift to distract me from the tedium that is Faythe. In fact, this entire book felt more like a dark, depressing detour from the great highway of the series as a whole. It certainly did nothing towards furthering the plot of upcoming war between prides. It possibly provided a sort of ally...maybe...but the sort of ally that'd eviscerate you sooner than help you. I just don't get it. And I'm sorry, but for some reason it really started to grate on my nerves that Faythe is the main character of this series, because frankly, it makes everyone else around her seem ineffective at best, and completely idiotic at worst - including her father, the alpha. If Faythe is the best that the pride can do to actually get things done, they've got bigger problems than Malone.

And is it just me, or does the same sort of thing happen in every book? Faythe gets kidnapped. Her value as a tabby is shoved down our throats. Her all-important (but by this point, overwritten) struggle to maintain her value as an enforcer is called into question. She's assaulted and bedraggled. She overcomes some sort of stupidity of her own making. She pushes away/denies/betrays Marc. She looks back and pats herself on the back for her "growth." Lather. Rinse. Repeat.

Faythe is one of the most self-centered, narcissistic, selfish, petulant, immature characters I've ever had the misfortune of seeing star in a series. Her misplaced sense of entitlement is beyond the pale. I tolerated her through the first few books because I thought the surrounding story was good enough and I expected her to grow into a stronger, better person. After Shift, I've given up hope of that. Her behavior concerning the Jace-Faythe-Marc debacle was utterly contemptible. Period. The fact that that triangle exists at all and that the author beat us over the head with it to the exclusion of arc progression was inexcusable. The utter prostitution of Marc's character development in the series to date to allow for it is reprehensible. And if the only reason Vincent killed off Ethan, one of my favorite characters of the series, was to give Jace and Faythe a reason to screw, it's disgusting. If I wanted to read an urban fantasy series ripe with inexplicable emotional vomit spewing across the pages, I'd go back to reading LKH's Anita Blake series.

All that being said, I give Shift two stars. The second one was for the creation and originality of the thunderbird race. Rachel Vincent can tell a story - obviously, I don't always agree with the manner in which she does so, but I will not deny that her narrative is compelling and her imagination is impressive. I wish a bit more thought had been given to the series arc and the gradual progression of her characters, so each book didn't have the same rough formula, but I have read each book and intend to read the last, so that's something, I guess. Shift, though, was disappointing, and I felt it a severe step back in character development and a detour in series arc.