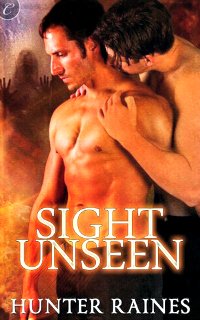 Danny Van Doren sees dead people. In fact, that's all he sees. Blind since the accident that stole his sight, his lover, and his career, the writer has been working with Phoenix PD, helping them solve the cases of the spirits he sees.

Unfortunately that help has drawn a lot of attention from media types who want to neatly label him as a charlatan or a fraud. It's making Danny popular for all the wrong reasons and in all the wrong ways.

Ghostwriter Logan Riley works for a publisher who wants Danny's story, and they're willing to pay Danny a lot of money to let Logan hang around and write it. What Logan doesn't tell the man is that his publisher prefers when he digs up the most scandalous and salacious bits of interesting people's lives and puts all the gritty details in print.

Some might - and have - said that makes Logan no better than a pack of paparazzo, but Logan doesn't care about the sensationalism of his subjects' lives. He just cares about finding the truth. Truths like whether or not the seemingly earnest Danny is a con man or just mentally ill.

And he's steadfast on that stance right up until a pissed off poltergeist decides he's getting a little too cozy with the handsome ghost detective.

There's something intrinsically appealing to me about heroes or heroines who manage their lives despite having a disability of some sort, so the idea of a blind guy who sees ghosts and helps the cops find the monsters responsible for them sold me on trying this book. I'm glad I did. Well-written and fast-paced, flavored with spooky ghost activity and two hot guys who were totally into each other, this was a great read. I especially appreciated the nice touches in keeping Danny's blindness realistic and believable while still providing a balanced, descriptive narrative.

The depth of character in both male leads and a solid and nicely layered plot kept me entertained as it provided a few touches of horror, some chills and thrills, and some temperature raising sex scenes. I liked both Logan and Danny. They had genuine chemistry that hit fast and burned deep. Each has inner demons that impacted the evolving relationship as the story progressed, creating realistic, organic conflict and romantic tension.

I wasn't expecting the level of detail and complexity provided in the main characters' backstory. It built slowly, with little bits and pieces of their past disclosed as it pertained to the growing external conflict with the freaky-deaky poltergeist. And there were a couple of secondary characters I really enjoyed. There was even a very subtle secondary romance thread between Danny's sister and her ex-husband that tickled me. All of these elements worked together to create a balanced, well-rounded story.

The romance arc was the only thing that caused me some problems. As much as I enjoyed Danny and Logan together, the timeline of the story was short, with everything happening over a handful of days, so I had some problems with how quickly they became as important to each other as they were. It was the only thing about the read that didn't work for me, and unfortunately, it hampered my appreciation of what was supposed to be a sweeping romantic scene towards the end of the book.

It ended up coming off as cheesy to me instead of romantic.

I loved the epilogue, though. It was set long enough into the future that the issue I had with the romance arc was resolved and the strength of Danny and Logan's commitment to each other was sweet and endearing. As a whole, I felt this was a meaty, entertaining novel that fully engaged and entertained me, even with my issues with the romance arc. I look forward to reading more from Hunter Raines in the future.

Return from Sight Unseen to LGBT-M/M

Return from Sight Unseen to One Good Book Home