It's Like Going Home in All the Best Ways 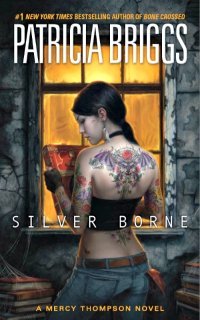 Sinking into a Mercy Thompson book feels very much like returning to a much beloved and slightly glossier (okay, and a bit more dangerous) home after a long trip away. It's comfortable, even when the characters aren't in the most comfortable situations, and it's fun, even when what's going on is in no way fun. That's the gift Patricia Briggs brings to her readers. She is excellent at her craft. Sometimes it's hard to believe this is only the fifth book in the Mercy Thompson series, because I feel like I've known these characters - Mercy, Adam, Samuel, Zee, etc. - forever. They feel like old friends...well...old friends you wouldn't necessarily want over to dinner if the moon is full, anyway.

In Silver Borne, Mercy is dealing with the growing relationship between her and her mate, the Alpha of the Three Rivers pack Adam, and the problems that relationship is causing within his pack, but in typical Mercy fashion, she doesn't just have a small helping of trouble on her plate - it's a plate of trouble big enough for a werewolf - and in this case, the added helpings of trouble are the suicidal Samuel and the missing Phin, bookstore owner and part fae who lent Mercy a book about fae and who has now disappeared.

I'm fairly convinced by now that Briggs doesn't tell a bad story, and parts of this book I absolutely loved. The growth in Mercy's character continues to impress me, especially after a lifetime of independence and a horrifying rape in a previous novel . She's one of the few urban fantasy series heroines that continues to grow and evolve in very organic ways during the series, and I appreciate that as a reader. I was particularly delighted with everything in this book related to the pack and Adam and her struggles with Samuel. Spending some time with Sam was a real treat. Seeing Ben's growth and glimpsing some of his vulnerability and dedication to his pack was a joy. Experiencing Mercy's intelligence and her willingness to open up even more of herself to Adam was fantastic.

I wasn't totally convinced about the issues with the fae, about Phin and the book he lent her. I'm not sure why that aspect of the book didn't totally work for me, except it almost seemed like a bit of an afterthought, even after the stakes were raised and Mercy was pulled into it in a big way. I question the manner in which Briggs decided to write the conflict there, and without giving spoilers, it's hard to elucidate more than that. I can only say that while the conflict was ongoing, I wasn't as emotionally invested as the characters were, and didn't feel the tension that I've felt in each past book when Mercy is dealing with bad things that can eat her. I also missed Stephan in this book, but I don't criticize the book for it - I just really like the character.

Regardless, Patricia Briggs' Mercy Thompson series and her Alpha and Omega series are always must-buys for me, because I just love how Briggs tells a story. The combination of her imagination and her writing style never fail to give me a good time while reading and my only true complaint is that River Marked (Mercy Thompson, Book 6) won't be available until January 25, 2011. Oh, the cross we bear!