Too Much...And Not Enough 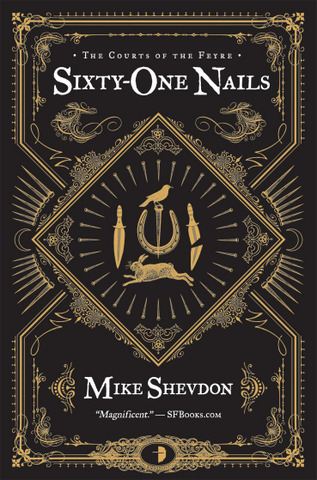 Series:   Courts of the Feyre, Book 1

Niall Petersen died one morning in the London Underground as he scrambled to make it to work. Fortunately for him, it wasn't a permanent condition. Less fortunate, his new life has takes a turn to the surreal. Rescued...resuscitated...re-something by a mysterious and slightly querulous older woman who calls herself Blackbird, speaks of incomprehensible things, and spouts dire warnings at random, Niall can hardly wait to get away from her and get back to his average, normal life. Until the proof of Blackbird's wild admonitions becomes irrefutable, Niall intended to do just that. But about that proof...

Blackbird isn't strictly human, and neither is Niall. Blackbird gives him the quick and dirty bone up on his true heritage as a Feyre/human hybrid. Along with that magical yet dubious heritage comes some inherent and grisly risk, namely the threat of the Untainted, the Seventh Court of Feyre, who hunt down and kill half-breeds such as himself out of a deep arrogance and disgust for the mixed race children.

Niall's life as he knew it was over, and now, as Rabbit, he would spend the rest of his life hiding from those who would kill him, hoping one of the other Courts would allow him to swear allegiance. He figured life couldn't get much grimmer than that...until he and Blackbird stumble onto a plot by the Untainted to bring down the barrier that keeps most of the Untainted in a different world, unable to wreak havoc on the Courts and the humans alike. If the barrier falls, more than just Niall's life would be over - so would everyone else's.

While Sixty-One Nails (Courts of the Feyre, Book 1) is normally the sort of book that's right up my alley, I had a very hard time getting into, then through this one. Technically sound, with an interesting concept and well developed world, I kept getting mired down in the plodding pace and lack of emotional expression of the characters.

I applaud Shevdon's creativity and the blending of historical and fantastical, which lent the book a weighty sincerity and sense of realism, but the combination of bland characters, overwhelming description, and excessive detail kept me from really enjoying the good points.

Niall was pretty solid as an Everyman bloke; he was about as mundane a character as I've ever read. Normally, that would be an appealing trait as he gradually became more and more aware of the full nature of the world around him, but he was so intensely lacking in almost all emotional expression, I couldn't quite connect to him or feel much for his plight. Even in situations when terror would be the expected response, there just wasn't all that much offered in the way of his feelings. Admittedly, part of that could be the British stiff upper lip and intended for that character, but it didn't make my reading any easier. Blackbird was the more flamboyant of the two, but again, there just wasn't much in the way of emotional expression for her either.

What the book lacked in emotional expression, though, it more than made up for in an overabundance of description. Every step - some racing, most plodding - of the journey that Blackbird and Rabbit embark on is laid out in sometimes excruciating detail that slowed down the pacing of the plot and leached the impact from what could have been the action-packed moments. And I felt like I was plodding right along with them. No more effected by their increasingly dangerous circumstances than they seemed to be. With just as little sense of urgency.

There were some plot points that I struggled with, like why - if it was so important that the Untainted stayed in their own dimension - didn't the half breed Blackbird go to her Court when she realized what the problem really was and how over their heads she and Rabbit (Niall) had gotten? I would think a potential world-ending disaster would be something for which you'd request help, especially as they were the other six Courts set up that barrier in the first place. And I'm still not sure how Rabbit's responsibilities shifted so significantly from "stay alive" to "save the world," and never quite bought into the convenient plot thread of prognosticated images given to him by a mysterious Feyre with little backstory guiding him on his ill-defined path. That seemed a little cliched to me.

Rabbit's ability to wield his magic so effectively on more than one occasion also gave me pause once or twice. He seemed just a step or two behind Blackbird, when in truth he was several hundred years her junior and didn't even believe in magic just a heartbeat or so ago. It also seemed like there was a contradiction in how difficult it was for members of the Seventh Court to get to our realm and at their victims, even taking into account the weakening of the barrier. At the beginning Blackbird was pretty sure about what the Untainted could or couldn't be able to try in their killing quest for Rabbit, and the results of her actions seemed to bear that out, only to have that break apart just a day or so later when the two Untainted come and go with apparent ease down in the tunnels. If the weakened barrier was solely responsible for the change, then I'm not sure why they had to check out what was down there. There were a couple of other, similar but smaller plot holes - or questions about potential plot holes - that that stuck out as I was reading, as well.

In truth, though, those issues were relatively minor for me and I would have easily overlooked them if not for one thing. Despite the deft world building, and Niall being a likable, if a bit bland character, and Blackbird being uniquely coy and at times mercurial, the overall impression I got from the book was feeling overwhelmed by the sheer, seemingly interminable length of it. A length that bordered 'epic' but didn't garner the same visceral response as such.

Had the volume been ruthlessly paired down to summarize or quick-step through the less significant parts of the trials and tribulations of Rabbit and Blackbird, the action sequences more closely spaced, and the emotions of the characters incorporated into their definition and development, I would have felt far different about this book and anxious to read more. As it stands, I just don't know if I can.