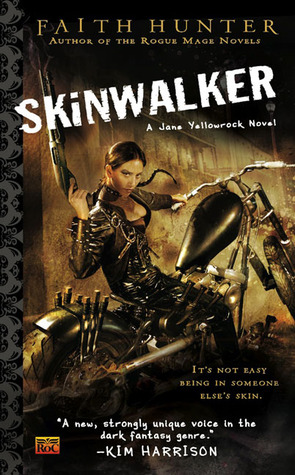 Wow! What a great kick off to a fresh new series!

Jane Yellowrock is a Skinwalker, a shamanistic, Native American shape-changer, and as far as she knows, the only one left of her kind. That she's also dual-souled, and shares a body with Beast, a mountain lion and a predator of the first order, makes Jane unique even among other Skinwalkers. She uses her skills to hunt rogue vampires, and while she's made a name for herself at her job, she's just taken a contract on a rogue vamp, offered by one of the "sane" vampire councils, and she arrives in New Orleans to find out that she doesn't know much about the more genteel brethren of her prey. She's got to learn fast, while dodging too much scrutiny aimed her way, or she could end up dead or blood-enslaved by more than one threat - and she's not too sure which one would be worse.

There's a lot given to the reader in the way of fleshing out the world of Jane Yellowrock that can be built on, such the origins of the Mithran (vampires), brilliantly alluded to as a large and religiously significant occurrence that is both new to me and refreshing for it. There is also the existence of magic, and Jane's best friend and family are witches, and the glimpses we got into that aspect of the world were original and stamped with Faith Hunter's own ingenuity. All in all, very interesting teasers abound in Skinwalker that guarantee me tuning in for the next installment.

I do want to expand, though, on my thoughts concerning the darkness in this book. Human sensibility may be profoundly offended by what some would consider over-the-top gruesome detail that shows up sporadically through the book (more so in the last quarter of it). Taken in the context of character, however, I read these parts as a rather subtly drawn and significant plot device. Jane co-exists with the soul of a big cat - a mountain lion - and more than a little of the nature of that predator has been apart of her for a very long time (you'll be surprised just how long if you pick up on the flash of memory sequence that refers to it). While I can understand the very real human horror that some will feel at the brutally descriptive scenes, I temper that with the knowledge that Jane is not, in fact, human. Never was. And since joining with Beast, is even less so. The predatory aspects that are detailed here are brutal, but brilliantly executed. I found them chilling, but no more disturbing to me personally than I find nature documentaries where prides of lion or the lone cheetah take down and devour the cute little impala young. Nature is conscienceless and brutal and only the strongest predators survive. That in this particular book, humans and vampires alike are the prey is a concept I found perhaps macabrely satisfying.

I would caution those who prefer to read more glossed over violence, however, that this may not be the book for you. Faith Hunter pulls no punches on this aspect of her prose.

The only critical comments I have is in the writing of Beast, the author doesn't maintain the same level of short-concept/image flashed/choppy internal dialogue throughout the book. As the book draws closer and closer to the end, Beast starts reverting to full sentences and it's jarring after having her tightly contained and definitively non-human expressions from the beginning. I also would've liked to see the Joe (and I got such a kick out of her referring to him that way) fleshed out and present a bit more, but it's a small complaint, because I have a feeling we'll be seeing more of him to come. Such wonderful teasers in this book!