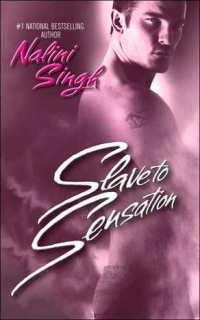 In 2079 the preeminent race, the Psy, rule the worlds of business and science with steel fists and cold hearts after a hundred years of Silence, a programming that strips their emotions and leaves them coldly clinical in their psychic gifts. They share the planet with humans and changelings, a race of shape shifters known for their animal aggressions and keen senses. Both are seen as less than the Psy, inferior in both mental strength and intellect. But as in all "superior" races, there is much that is hidden, more that is subject to interpretation, and so much that has been stolen from the individual Psy as they have subjugated their passions for an illusion with a very high price tag.

Cardinal Psy Sasha Duncan has hidden her flaws and imperfections from those who would sentence her to rehabilitation if it became known that she feels emotions. The daughter of one of the Council, the ruling body of Psy, she has had to be vigilant in shielding herself. Any weakness would spell her doom. When her mother puts her in charge of a new Psy-changleling business venture, Sasha comes face to face with a male whose very essence calls to the swarming emotions in her soul. Torn between two worlds, unable to leave her race without risking her life, her feelings for Lucas Hunter, alpha of the DarkRiver pack of leopard shifters in the area, threaten to overwhelm her yet tantalize her as she never dreamed.

When Lucas tells her of a Psy killer stalking the young women of the changeling packs, Sasha is horrified and disbelieving. The purpose of Silence was to strip such murderous emotions as rage, jealousy, and envy from her race. The truth, though, is even darker than Lucas knows. Sasha soon realizes that the very thing that was supposed to elevate her race above heinous crimes has instead created, harbored, and facilitated an insidious psychopathy and sociopathy. And now Sasha is left with no choice but to sacrifice herself to save her mate Lucas and catch a murderer before time runs out on his latest victim...and on her own fractured mind.

Nalini Singh has proven herself as one of the most creative and original writers of paranormal romance with both her Psy-Changelings series and her Guild Hunter series. Set apart and defined by strong, three dimensional characters, intricate, layered plots, and rich, thorough world building, Singh's books stand out and shine in a heavily glutted market.

This futuristic world of Psy and changelings is scary for its rational believability, with the mentally powerful Psy and the emotionally vibrant changelings. The scope and breadth of the PsyNet was a little hard to wrap my mind around as it was explained, but Sasha's motivations and concerns were visceral and sympathetic as her emotions started to rebel against unthinkable restrictions, and it was all too easy to understand the inherent dangers of Silence and the Council. Singh did a fantastic job slowly drawing Sasha away from the familiar and towards the seductive unknown represented by the leopard alpha Lucas Hunter.

Lucas was the quintessential alpha, challenging Sasha at every turn, even as his primal heat and wildly passionate emotions drew her like a moth to the flame. They were fantastic together as the romantic leads, and the secondary and ancillary characters of both the leopards and wolves added depth and dimension to both their romantic evolution and the subplot of the murder.

Admittedly, there was a lot of attention given to the world building and mythos of the series, and of course necessary development of the threads surrounding the changeling deaths, so there were aspects of the romance between Sasha and Lucas that I felt was a little rushed, but overall, this was a passionate and thoroughly satisfying book on that level.

I have to admit, futuristic novels aren't my favorite, and I did have some problems completely understanding the myriad of concepts surrounding both the PsyNet and the cultural mores of the changelings. It was a little difficult for me to really wrap my mind around all of it as it was laid out in this particular book. I have complete faith in Singh, though, and have no doubt that this unique world will continue to flesh out and come into clearer focus for me the longer I stick around. And trust me, I absolutely intend to stick around in this completely original and thought-provoking, emotional and romantic, and exquisitely well written series.

Return from Slave to Sensation to Paranormal Romance Genre

Return from Slave to Sensation to OGBDA Book Review Home