Sleep with the Lights On 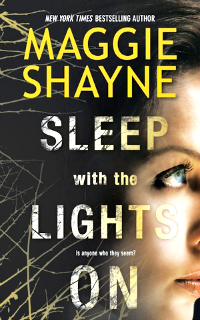 Disclosure:   An ARC of this book was provided to me by Harlequin MIRA via NetGalley.

Homicide detective Mason Brown broke the very law he's worked his entire adult life to uphold. In his defense, he had a very good reason. There was no way he could let his mother, his sister-in-law, or his two nephews find out that the man they knew as a beloved son, husband, and father, the man Mason himself knew as a big brother, was, in fact, a cold-blooded serial killer.

When his brother suicides in Mason's apartment, leaving a self-pitying note of confession and a horrific mess to deal with, Mason does the best he can. He hides the evidence, and given the chance to make some sort of amends, donates his brother's organs. He hopes that saving some lives will balance out, just a little, what his brother took from so many.

After twenty years of blindness, the corneal transplant that restores Rachel de Luca's sight is like a miracle. Like something the famous self-help guru spouts in one of her own books, not that she's ever believed her own drivel, as wildly successful as it may be. As it turns out, Rachel's miracle is not without a few...glitches.

The nightmares of blood and gore and visions of murder start on her first night home from the hospital. Seeing and feeling the actions of a vicious killer is as confusing as it is terrifying, and as another victim falls, it makes Rachel wonder just what sort of person her donor had been. And how much the cop responsible for her transplant really knows.

Mason is absolutely certain that the serial killer dubbed The Wraith is dead. But when another victim is taken, and the woman who got his brother's corneas shows up, knowing things she shouldn't know about the crime, he doesn't know what to think. He just knows Rachel De Luca holds the key to figuring it out. If she doesn't end up being targeted by a dead killer first.

With a point of view that shifts between Rachel's first person perspective and a third person omniscient when focusing on Mason and glimpses of the killer, this series works for me in both style and substance. The concept isn't a new one. Heroine gets a corneal transplant and starts seeing death and mayhem because of the donor. Books and movies have tread that ground before. It was Rachel who set this book apart.

She was awesome. Sarcastic, often bitchy, and not exactly the most patient person on the planet, she's not your typical helpless, blind-then-newly sighted heroine. And she's no one's damsel in distress. Plus, she's a self-proclaimed fraud who writes writes wildly popular self-help books full of touchy-feely crap and disdains the very people who buy into them. I loved her.

As tough and independent as she was, she was a total softie with Myrtle (love Myrt!). She took no prisoners when faced with some pretty horrific images and definite woo-woo stuff, but took such gentle care of the old, blind dog. She was stubbornly self-sufficient and intelligent, but she also had a heart that lent warmth to her character. It didn't hurt she had such a biting and sarcastic sense of humor, either. That's one of my favorite things in a character.

I liked Mason, too. Maybe not quite as much as I did Rachel, but beyond being a gorgeous bit of man candy, I felt bad for the guy. He did the best he could for his family when it came to the fact his brother had been killing people for years. And the chemistry between him and Rachel pleased my romance-loving heart even though it never really becoming a focus in the narrative.

The plot of the book appealed to me, too. I'm a big fan of serial killer psychological suspense, an even bigger fan of paranormal romance, so the blending of the two in the story worked really well for me.

I do wish there had been a bit more explanation or backstory to better explain Eric's psychosis both before and after he died. I like having reasons for things, so there were elements that could have had a bit more definition in that regard. Too, the book went a little off the rails for me during the climax. Due to the nature of the tale, it skirts plausibility from the start, which I'm perfectly fine with, but there was a scene in the climax that went so far beyond plausible that it pretty effectively crushed my willing suspension of disbelief at a crucial moment.

Sound travels on a lake, man, that's all I'm saying.

All-in-all, though, there was a nice blend of character-driven psychological thriller and paranormal mystery with a thread of romance and it kept me entertained throughout.

I already know what comes next in the series, and highly recommend it if you liked this one. I think I prefer the external conflict in this one a little better than in that one, but for me, the storyline isn't the most appealing element of either read. The characters are. I love Rachel so much, and like Mason too, that I'll be following along with their antics for as long as I can. Heck, I must love them, I went back and read a series out of order for them. That's a huge deal for me.

Return from Sleep with the Lights On to Romantic Suspense