Snowbound With a Stranger

A Chilly Delight on a Summer Day 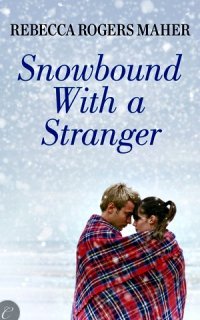 It was a great idea, the winter hike in the mountains with co-workers and acquaintences. Not that nurse Dannie Marino went to be social. She went for the silence, for the peaceful mindlessness that comes from focusing on staying alive. Her work is chaotic and draining and being on the mountain relaxes her.

Or it always had, until she arrives at the hike's starting point and comes face to face with a man she doesn't recognize, one who has come to help lead the group. There's nothing about him that relaxes Dannie, and that zing of attraction is enough to send her scurrying in the other direction.

Unfortunately for Dannie, being one with nature results in the inevitable need to answer its call, and she slips away from the group. When she's finished, she realizes that the other hikers have moved on, apparently without noticing her absence, and the falling snow has obscured the trail.

As weather conditions worsen, Dannie starts to worry that she won't be found before she succumbs to the cold. Just as her concern turns to serious fear, a form materializes out of the wind-whipped snow.

Lee Russo knows how much worse the storm will get, and he knows the only way to save both of them is to get to the cabin they'd been hiking towards all day. Once there, they'll be able to weather the blizzard that's starting to really rage. And with the chemistry Lee and Dannie generate, neither will have to worry about the freezing temperatures outside.

I have to admit, the setup for this novella is hardly unique. I've read similar stories of varying length many, many times. None of them prepared me for this one, though, and none of them set themselves apart nearly as well.

More than a traditional romance novella that strains my willing suspension of disbelief because of how quick the main characters first get horizontal, then declare undying love, this novella by Maher is more an emotional journey of healing and relief for both Lee and Dannie. It was beautiful, really, how these two layered, wounded characters slowly faced their own emotional damage, the chemistry between them serving as a buffer - a safe zone of sorts that allows them to open up enough to start addressing their issues.

I loved that both Lee and Dannie were older, in the late thirties/early forties range. Their emotional baggage was realistic, as was the way they approached the physical attraction between them. The story had moments of humor generated by two world-weary characters with enough self-awareness to take a sardonic view of things. It all felt very authentic, even given the unlikeliness of the romance-novel setup.

Maher dealt with the emotional elements of the relationship with aplomb. This isn't a novella that force feeds readers an unlikely Happily Ever After. Given the brief time Lee and Dannie spend together and the places they are in their lives, that would have been a huge stretch, but there is definitely an air of hope for both of them. And that hope buoys them as individuals even as it points toward the relationship potential between them.

At approximately seventy-three pages, it's definitely not a long story, so I couldn't help but feel impressed that the tale had such depth of emotion and complexity of conflict. It was as sublimely satisfying as a book twice it's length. I wouldn't jump to recommend it for fans of the undying love romances, but for readers who appreciate their fictional romance fantasy flavored with realism and hope, this short tale is a truly wonderful read.

Return from Snowbound With a Stranger to Contemporary Romance

Return from Snowbound With a Stranger to OGBDA Book Review Home