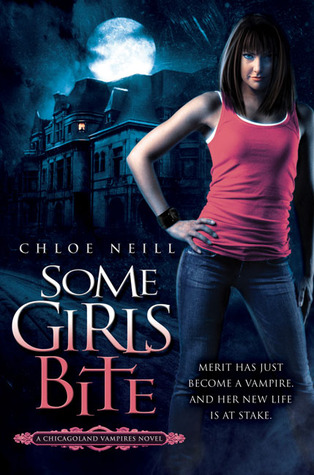 Lately, the criteria for whether a new urban fantasy series sinks or swims with me has primarily been centered around the main character, with supporting characters and plot of equal but secondary importance. That's mostly because there's just not all that much that can set apart the first book in a UF series when you've got vampires, were-animals, sorcerers, and fae in the world. Some Girls Bite is no exception in that regard. Vampires have come out of the closet, so to speak, and are working a wicked PR campaign to keep the human population from turning into the next incarnation of the Spanish Inquisition. The main character is attacked and turned without being given a choice (that's actually an important distinction from "against her will," though). Much angst and adjustment abound. That's a VERY surface summary, but on that surface, it's just not that new a premise.

If you go no further and decide not to read Some Girls Bite based on the surface appearance of "just another vamp urban fantasy," you're going to be doing yourself a disservice, because this book and the main character, Merit (it's her last name and she's sort of touchy about her first one - to the point of not letting us know what it is), develops all sorts of layers below the surface. She does go through her fair share of recriminations and angst, but from the first page of the book, you know it's not going to last, and by the last page it seems to be over, so I'm okay with it. It seemed natural instead of mind-numbingly repetitive, as with so many other "woe is me, I'm a kick-ass heroine and still bemoan my very existence" heroines. You know the ones I mean.

Where Some Girls Bite sets itself apart is in the development of the many layers of supernatural life you just truly start to get a glimpse of in this debut. Vampires aren't your typical...well...actually, they aren't your typical anything, and I wouldn't call them undead if I were you - more like "Otherwise Alive." Their internal political and social structure is a rather amusing (when it's not disturbing in its antiquity) blend of a collegiate Frat Row and feudal England. As diametrically opposed as those two things may be, it actually works in this book and I thought it was sort of a nifty new take on an old standard. You don't get much of a glimpse of the other supernaturals in this world, but there's enough to interest you with the teasers and the allusions to their importance, particularly the order of sorcerers that the dark and delicious Catcher had belonged to and is preparing blue-haired, ad design maven, best friend Mallory for.

And I really really liked Merit. She has moments of brainlessness (well...okay...days of them, actually - but getting changed apparently isn't the easiest thing), and that usually turns me off a main character, but she acknowledges those with her best friend, and given her education, her independence despite monied, emotionally distant, social-climbing parents, and how she ends up pulling things together towards the end of the book, you know she's never going to be one of those TSTL protagonists.

The secondary characters are fun and dangerous at turns, but utterly believable and delightfully real, and I liked and appreciated the time taken to flesh them out and give them more than two dimensions. And Ethan's just an absolutely fantastic anachronistic delight - driven by the weight of historic responsibility yet intensely interested in Merit, the antithesis of everything and everyone he's ever known. Their scenes together are searing tugs-of-war that thrill and amuse and titillate.

I did think that the beginning started out slow (pre-commencement), and there were a few times when Merit did annoy me a bit more than I would've liked, hence the four stars, but what truly impresses me is the exceptional potential that this book gives to the upcoming series. I recommend this book and can't wait to get my hands on the next installment, Friday Night Bites.

Return from Some Girls Bite to Urban Fantasy Genre

Return from Some Girls Bite to OGBDA Book Reviews Home