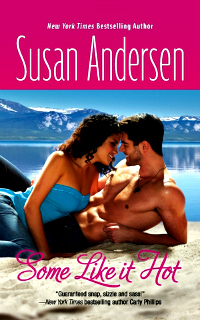 Disclosure:   An ARC of this book was provided to me by Harlequin HQN via NetGalley.

Quintessential rolling stone Harper Summerville loves her job. She travels the globe, staying in a place just long enough to investigate the charities that have submitted a request for financial assistance from her family's Sundays Child foundation. It's Harper's job to determine the requesting organization's needs and the quality of care they provide, to make sure foundation funds are going to the best candidates.

It's the sort of job that fits her right down to her toes, because Harper's never been - and never will be - one to let any sort of moss grow under her feet. At least, that's what she keeps telling herself. Now that she's in the Washington town of Razor Bay and has met the delectable sheriff deputy Max Bradshaw, Harper has started to wonder about some of her wanderlust ways.

It's never been hard to move on before, in fact, she gets downright itchy if she stays in one place for too long, but there's something about the gorgeous, kind, but wounded Max. Harper's feeling an itch all right, but it has nothing at all to do with getting out of town and everything to do with one tall, dark, and oh-so-handsome lawman.

If you haven't read the first book in Andersen's Razor Bay series, don't worry. I haven't either, and it didn't cause me any problems with this book, though it was clear that all the characters and some of the underlying issues were previously introduced. Frankly, I'm okay with not reading that first book, because while I liked Jenny and Jake well enough as secondary characters in this book, I don't know that they would've appealed to me as much in the primary roles as did Harper and Max.

Not that there was anything wrong with Harper. There wasn't at all. She's a smart, independent woman with a big heart and caring nature. I wasn't totally able to relate to her rolling-stone ways, and I didn't like that the relationship between her and Max got physical before she got honest with him about her true purpose in Razor Bay, but watching her reach out and form deeper connections with friends and coworkers as her character grows in the story was a part of the fun of the read.

The lies and secrecy did make the inevitable relationship conflict too predictable and the buildup to the conflict climax more than a little formulaic, but in this sort of light, sexy romance, predictability and formula aren't huge detractors. In fact, this book is just the sort of reasonably uncomplicated brain candy that I was hoping it would be. There isn't a huge morass of angst or a lot of emotional melodrama, just two good looking characters with varying degrees of personal baggage and a few external complications.

And I loved the heck out Max. He was quite the full package in romantic heroes. Despite the troubled childhood and an adulthood shadowed by elements of darkness, he was still a truly nice guy - but with just the right amount of sexy edge and a dash of social awkwardness that warmed my heart even as it heated my blood. He was so, so yummy.

I liked the slow build in the relationship between him and Harper, too. They fit nicely together from the start, their initial run-ins flavored with sizzling sexual chemistry and the sweetest taste of earnest uncertainty. I was also pleased that the narrative didn't rush to throw them together romantically for the sheer purpose of getting them naked and horizontal. The majority of the first half of the book showed them mostly dancing around one another while each dealt with their own various internal and external issues.

Of course, them getting together didn't suck either. There were plenty of hot times in Razor Bay.

This was just an all around fun read for me, good for a few solid hours of light reading enjoyment. Basically what I expect from an Andersen romance, really. There was even a few teasers for what's to come in the next book in the series. Luc's introduction was a little heavy-handed in the last bit of this book, but there's an interesting dynamic between him and Harper's friend Tasha that's hinted at here and I'll keep my eye out for their book when it comes out.

Return from Some Like it Hot to Contemporary Romance

Return from Some Like it Hot to One Good Book Home