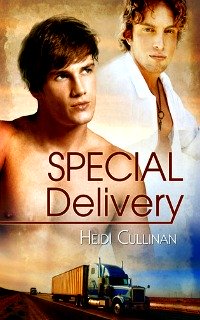 At twenty-one, Sam Keller is little more than a confused boy, shamed by sexual needs he doesn't understand but driven by them regardless. He's known he's gay since he was ten, had a supportive and loving mother accepting him for it, but his mother died of cancer four years ago and his life since then hasn't been easy. Saddled with restrictive relatives and a provincial town without much for a gay man to do to spread his sexual wings, he yearns for more than a loving relationship with a man, aches to be used and dominated, and that yearning makes him feel dirty and stupid and wrong. But it doesn't stop it.

He runs across Mitch Tedsoe in the alley behind his Aunt and Uncle's pharmacy. Mitch is a trucker with a great body and as the older man flirts with Sam, all Sam wants to do is go into Mitch's truck and do whatever the man wants him to. So he does. And it's exactly what Sam needs. The repercussions from that tryst, however, goad Sam into running away with Mitch and they travel across country.

What began as a tryst turns into the most significant relationship of Sam and Mitch's life and Sam eventually thrives under Mitch's careful handling. The cold truth, however, is that no matter how long and delightful the vacation, it always ends. And accepting yourself, respecting your needs is wonderful...but all for naught if it's not accompanied with growing up in the process. Will Sam's desire to be the man that he wants to be destroy the bond between two men made for each other? Thousands of miles on the road can't answer that question.

Special Delivery is a well written, complex tale of growth and discovery, self acceptance and exploration, with characters and situations that are believable and honest - sometimes brutally so. The fluidity of Cullinan's narrative and the depth of character pathos and conflict was compelling, and the dialogue realistic. I was drawn into Sam's head and felt so much for him throughout the story - to the point I was uncomfortable with it - but I acknowledge the skill it takes to draw readers in like that, and admire it.

I did have a couple of issues and found a few inconsistencies in the background and plot (e.g. Sam's mother has been dead four years, but he tells Randy it was three late in the book) and one or two things that didn't make sense (e.g. Mitch tells Sam he knows middle-aged men who fuss less than he does, and in context, it should have been 'more than'). I had a bigger problem with Mitch mentioning more than once that Sam reminds him of Randy...but never with any context...and Sam and Randy are about as diametrically opposed as two characters can be, so in retrospect, each mention felt more like authorial manipulation than organic plot development. A heavy-handed author's tool to introduce an impending conflict, heighten the emotional response to it, and further muck up the sexual quagmire between them all. Despite those issues, this story was overall technically well written.

I had bigger problems with the story itself.

I realized quickly that this book is definitely one I'd categorize as an erotica romance - the sex was a huge part of the story, and an even bigger part of Sam's identity. There was a lot of it. I'm perfectly okay with that - heck, I like that. What I'm not so okay with, however, was the nature of the sex in Special Delivery and the vicious cycle of emotional damage it was reflecting.

I'm actively aware of the many vibrant, varied colors in the kinky-sex rainbow, and everyone is entitled to whichever and however many colors turn them on. I embrace mine and I hope you embrace yours. The flip side to that yummy coin is less rosy, but just as important - everyone has their own line where hot sexy fun crosses into uncomfortable, painful (emotionally or physically), or just flat-out wrong for them. Sexual humiliation and shame cross my lines. I don't find either sexy or titillating, and am quickly turned off by both.

Sam spent so much of this book expressing the craving for humiliation and then feeling shame for his sexual needs and acts that the sex through most of the book was very off-putting for me and made Sam seem younger and far more damaged than in any way adventurous when he's on the road with Mitch. I found it exceptionally disturbing and it made me very uncomfortable, robbing me of any enjoyment of what would have been exceptionally delicious, well written kinky sex. More importantly, it shattered my ability to enjoy in any way, shape, or form the romance aspects of the plot. And this part of the book offended me: "Subordinate. Submissive. Someone who wanted people to do things to him, to shame him, to punish him." (K.Location 4891) That excerpt and the surrounding paragraph seemed foster a stereotype that being a submissive is synonymous with wanting to be hurt and/or humiliated or is in any way shameful. That is blatantly untrue. It can be those things, some submissives do want/need those things, but it doesn't have to be any of them.

I want to make this clear: it was not the sexual acts in and of themselves with which I had a problem. I found nothing too hard core in any of them - kinky, yes...maybe even a little bent...but in the right hands, none of the acts described were particularly extreme, and none of them humiliating or shameful to enjoy on their own merits. My huge sense of discomfort with the sexual scenes in this book come solely from the emotional response and emotional motivation of the lead character.

Perhaps had their been a better balance in the written sex scenes. As the reader, you know early on that Sam wants both a loving relationship and to be used like a whore. He admits exactly that to himself. He gets involved with a man who recognizes and respects the importance of boundaries and exploration, and revels in his lover's debauchery - it's the perfect relationship for Sam...but that darn shame kept haunting him long into his trip with Mitch.

Even after Sam had embraced his love of kink, accepted himself, freed his inhibitions, and dropped the shame (though still driven by his need for some poorly defined internal humiliation), it was far too late in the book to allow for sufficient time to revel in the difference. And not once did we get a well written, detailed sex scene that wasn't about the kink - they existed...they were mentioned...but were glossed over in passing ("we made epic love all night"), leaving the sum of the sexuality far too one-sided for my tastes. So on top of the lines that were crossed by the humiliation and shame, there was no balance to the tone of the sex and very limited foundation for the romance that came together by the end.

I almost fell over when I read the conclusion, in fact. It was nice and all, but it seemed completely out of left field. I was left wondering how Mitch and Sam would balance their emotional and physical relationship...because nothing in the story gave us any clue in that regard. Far too much went unsaid between them through the whole book about what they mean to each other (I've developed a real loathing of scenes and conversations heavy in subtext because I can never seem to grasp what's trying to be said or what it all means - and there were lots of them in this book). To put it succinctly, though this book was technically well-written, it got nowhere close to my preferences for a romance (even an erotic romance) and crossed too many of my lines for me to enjoy it.

On a side note, I feel the product description of this book on Amazon.com was misleading and should have provided readers a more comprehensive picture of the scope of the sexuality included in the story. I have absolutely no idea of the responsible party for that, so it didn't affect my rating...but I can tell you if I had known beforehand, I would have avoided this story. I want to be entertained when I read...especially when I read a supposedly light HEA romance, not uncomfortable.

Return from Special Delivery to LGBT-M/M

Return from Special Delivery to One Good Book Home