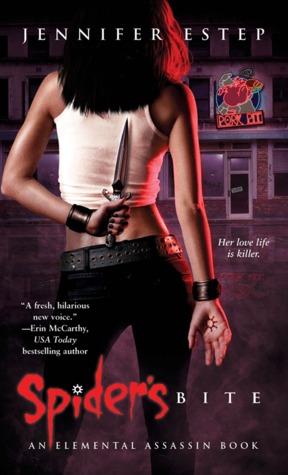 Jennifer Estep has created a new series with a quintessential anti-heroine, Gin, an assassin with enough moral ambiguity to make mafia dons proud. Far removed from Estep's lighter fare, Spider's Bite is a dark urban fantasy featuring a very complex character, Gin Blanco, a woman who has suffered unthinkable loss and tragedy and turned herself into a deadly weapon to survive. Don't rally behind her too quickly, though, because while there are certainly aspects of Gin's character that are sympathetic and even one or two that are endearing, she's unapologetic about her profession. She has lines that she doesn't cross - no killing kids or pets, no torture, that sort of thing - but she's racked up an impressive body count and her assassin tag, The Spider, instills fear into the hearts of those who may end up a victim of her blades.

When a lucrative job goes as bad as it possibly can, Gin is double-crossed, almost killed, marked for death, her handler is brutally tortured and killed, and she's framed for a murder she didn't commit. She goes on the offensive to discover who hired her and why. With the help of her handler's son, Finn, and the one honest cop on the whole of the Ashland police force, she's committed to finding out who is responsible for killing her handler Fletcher and killing the hell out of them right back...or she'll die trying. In the alternate universe Estep's created, Gin lives in Ashland, a strange blend of crime, corruption, and picture-perfect suburbia, populated by humans, vampires, giants, gnomes and others, and Elementals - magic uses who control the elements of Stone, Ice, Fire, and Air. Gin is an Elemental with control over Stone and a lesser ability with Ice, but she eschews her magical talents when it comes to assassinations, preferring to rely on her wit, patience, and blades.

The strongest aspect of Spider's Bite is the character of Gin. Estep did an impressive job with her character definition and development. I very much appreciated her complexity, depth, and intelligence. She's flawed, damaged, and almost sociopathic, and I was fond of the combination of internal strength, fortitude, and physical aptitude. I liked her friend/associate Finn, as well, and though he wasn't as fleshed out as Gin and he played a careless playboy roll a little too often, I sympathized with him over the loss of his father. The cop, Detective Donovan Caine, was a bit too morally superior and way too judgmental and critical for me to warm up to him much.

While I'm a huge Gin fan, however, I'm not as big a fan of the plot and climax of Spider's Bite. I thought the beginning was weighed down by too much exposition and the middle dragged as the book practically plodded towards a not too surprising (though it tried to be) conclusion. And the plot itself: assassin double-crossed, handler killed, has to find out who did it and fast - wasn't all that compelling or dangerous and felt a bit cliched.

I also had some serious issues with technical aspects of the book. I felt there was way too much repetition, most notably in descriptive passages (if I had to read about Donovan's soapy scent one more time, or Gin's cold, gray eyes/stare, or see anyone else's eyes flash with emotion I was tossing my Kindle out the window). There were far too many awkward and unnecessary analogies used, as well, also as a descriptive tool that fell flat ("Finn's voice dripped with sarcasm like grease off a piece of bacon." "Emotions flashed in his eyes like lightning."). It got to a point where almost everything described was "like" something else. Analogous narrative can be a useful tool, but it was horribly overused here. I also had a problem with a couple of Gin's "hits." I admit, I'm no expert in human biology or pathology, but it felt like it should have taken a lot longer for Gin's targets to die from their wounds (in one case a screw perforating the trachea) than it did in several instances in the book. I'd have preferred either better description of the wounds inflicted or an explanation that a major organ, like the heart, or a major artery (brachial) was hit. Either that or be a little more realistic in length of time between a wound and death. I wish an editor had tightened up all those aspects of the book a bit more, because it got very distracting for me and I struggled at times to stay in the story.

I have to say, though, points to Estep for the wickedly subtle but nifty series cross-over with the mention of Fiona Fine's menswear collection. If you're unfamiliar with the fab Ms. Fine, check out Estep's delightfully campy and fun Bigtime series. Estep's second book in the An Elemental Assassin series is now out, and I look forward to continuing the tales of Gin, because regardless of the issues I had, I'm still interested enough to keep going with the series.