A Bit of a Disconnect for Me 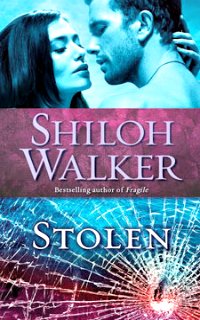 She fled to the end of the earth...

When she was a child, Shay Morgan survived the sort of brutality that leaves the deepest scars and the most terrorizing nightmares. To protect herself, she stays off the grid, living in Earth's End, Alaska. She has few true friends and the one man she loved dumped her because she could never open up to him, no matter how much she wanted to. Her life is a lie told to perpetual strangers, the truth too shattering to ever be revealed.

Two weeks after a serious car accident, Shay has finally recovered enough to start to getting back to her life, but a trip to a friend's bookstore brings her face to face with her ex-boyfriend Elliot Winter. On its own, their conversation has the power to leave her hurting and shaken, but it's what she sees on the bookshelf beside the man that rocks her to her core. A signed copy of the latest thriller by author Shane Neil.

The problem with that seemingly innocuous discovery is twofold. Shane Neil is a very carefully guarded secret of Shay's. The name is her nom de plume. But she sure as hell didn't sign any of her new books...for that bookstore or any other.

The closer Shay looks into the mystery of who signed the books she authored, the more troubling her life becomes. Facebook, Twitter, and online outlets everywhere have been impacted by this impostor in a detailed and disturbing case of identity theft that threatens to expose Shay to the very man she's been hiding from her entire adult life even as it targets Elliot, the man she still loves. But when identity theft turns out to be the very least of the perpetrator's crimes, Shay may no longer have the luxury of worrying about her past. Her present has become deadly enough.

One of my favorite things about Shiloh Walker's books is her gift for creating truly damaged characters who have been through hell and are flawed and/or broken as a result, who are then, through the plot of the book, put through more hell before they get a chance at redemption or happiness. That gift is sometimes a double-edged sword, though, because occasionally her characters have gone through so much and are going through so much more that I can sometimes find the journey from Point A to Point HEA a little too dark and depressing, or the level of damage a character has is so severe that it makes it hard to relate to them and really embrace them in their full role.

That was the case for me in this book.

I struggled quite a lot with Shay as the main character. I loved the concept of the story, and could understand and sympathize with why she is where she is geographically as well as emotionally at the start of the book, but somewhere around the middle it started to really drag me down. I couldn't quite connect with the story or the romance because of just how much Shay was going through and how deeply damaged she was.

I liked Elliot, and I thought the story was scary for just how easy it was for the Big Bad to infiltrate Shay's life and completely take it over. She had worked so hard to hide that she managed to create the perfect opportunity to be victimized yet again. Given the proliferation of social media in our daily lives, it's eerily easy to imagine everything that the Big Bad was able to do. That's actually a little terrifying.

It didn't create a good foundation for the romance for me, though, and I need to be on board with both the romantic elements and the suspense elements for a romantic suspense novel to really work for me. I just think Shay needed some serious therapy and as good as Elliot was to her (eventually) and for her, I don't think he was enough to truly heal the sort of wounds Shay has.

None of that makes this a bad book. Walker writes extremely good suspense and very hot romance, and the combination of the two couldn't possibly be bad, as far as I'm concerned. It just wasn't quite something I could fully connect to and enjoy, either. Walker's Ash Trilogy worked much better for me in that regard.

Return from Stolen to Romantic Suspense

Return from Stolen to One Good Book Home